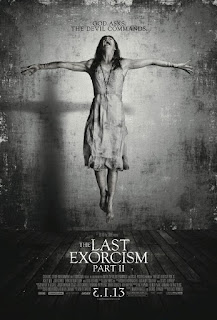 I quite liked The Last Exorcism.  I don't mind found footage movies as much as most people, especially if it has an intriguing plot or at least something to keep me watching.  That movie did, and it ended on a satisfying and chaotic note.  When I heard that a sequel would be made I was interested, as I thought we might learn more about the cult, why the baby was being sacrificed, what exactly the result was and what happened to Nell and everyone else.

Unfortunately, the only thing we find out in the sequel is what happened to Nell Sweetzer (Ashley Bell) afterward.  Also, it's not in the same found footage format, but instead a normal, low-budget horror film.

Turns out Nell survived and, still possessed, ended up in the home of a couple.  She is taken to a hospital and then placed in a halfway house under the care of Frank Merle (Muse Watson).  After therapy, making friends with her roommate Gwen (Julia Garner) and finding a potential boyfriend in coworker Chris (Spencer Treat Clark), she starts to believe that Abalam and the possession were never real.

However, while out on the town during Mardi Gras, she begins to be followed by masked figures and even sees a vision of her father (Louis Herthum).  Events build up as Abalam attempts to again gain control over Nell, this time not only with the desire to bring about the end of days but also because he has fallen in love with her.

Aid comes in the form of voodoo princess Cecile (Tarra Riggs) and a secret group known as the Order of the Right Hand, but it may already be too late for Nell and for all of humanity.

There is a bit of good in every movie, so I will start off with that.  The opening scene has some tension, I loved the scene in the church (although it reminded me quite a bit of The Omen) and the ending wasn't bad - although it could have been better executed.

It's too bad these few elements are surrounded by a meandering plot that does nothing to advance the story of the original.  Ashley Bell is great in this role, but for some reason she isn't given any chance to reprise the contortions she did herself in the original, outside of what is on the movie poster.  Instead, she seems to wander around as confused as most of the audience probably was.

Also, any good parts (particularly the ending) are marred by horrible CGI.  I don't know why they wasted the budget on the effects they did when normal old practical effects might have brought something to the party.  But, no, it has to be CGI fire and explosions, and it makes a moment that could have been quite shocking and memorable fall flat.