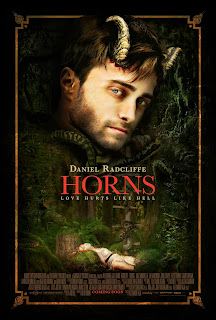 Alexandre Aja is a filmmaker that tends to pop up where I'm least expecting him.  Other than knowing that this was starring Daniel Radcliffe and a bit of the plot, I was not aware it was one of Aja's films.  High Tension was pretty good (the ending kind of messed it up), his remake of The Hills Have Eyes was on par with the original and Piranha 3D was pure, nasty fun.

I would not say that he has developed any particular style in the past.  Content-wise, he managed to throw in much of what other horror films only tease at.  Beyond that they could have been directed by about anybody.

I think Horns is where we finally see Aja coming into his own.  Based on a book by Joe Hill (Stephen King's son), Aja manages to work with something wholly original rather than building on certain elements of previous horror films or standing on the shoulders of other directors.

Ig Perrish (Radcliffe) is a disc jockey in a small Washington town not far from Seattle.  Since he was a kid he has been in love with Merrin (Juno Temple).  However, he is now at the center of the investigation into her murder, and the whole town is out to get him.  Constantly hounded by the press, he tries to drink away his grief and find the person who truly killed her.

After one such night of drinking that ends up with him in the bed of his friend Glenna (Kelli Garner), he notices that he has started to grow devil-like horns from his head.  This is quickly followed by the realization that, upon seeing the horns, people begin to reveal their innermost secrets to him and, at times, do exactly what he tells them to do.  Everyone, that is, except for his best friend Lee (Max Minghella), who is also the attorney for his case.  He decides to use his new-found power to find out who the killer really was.

More is revealed about what led up to the events of the night - Ig was about to propose, and Merrin abruptly broke off the relationship, leading to Ig getting black-out drunk.  His brother Terry (Joe Anderson) gave her a ride, but fell asleep stoned in his car after dropping her off.  He awakened to find a bloody rock and blood o his shirt and hands, and found her body in the forest.  He knew he didn't killer her but, instead of reporting it, he threw away the rock and his clothes.

Angry, alone and heartbroken, Ig embraces his new-found power (which also includes the ability to control snakes) and begins to take revenge upon those whose lies and inaction led to Merrin's death and Ig eventually being blamed for it.  He eventually does fin the real killer and must choose between redemption and revenge.

Daniel Radcliffe with an American accent was rather weird at first, but he does a great job with the role.  In fact, I'm looking forward to seeing him in more challenging roles, as he seems to be doing the impossible and shaking the Harry Potter typecast that could have derailed his career as soon as that series was over.

Some of the twists are not that surprising, but everyone is generally solid except Juno Temple.  I didn't have anything against the character she played (although it was more of a concept through Ig's eyes rather than a fully formed person), but although she's quite attractive, she has one of those squeaky little-girl voices.  Her delivery is also quite flat.  But then, maybe that's how she was meant to be, as we're seeing her as Ig sees her.

Despite its grim premise, one of the things that really helps move this film along is a wicked sense of humor.  While some of the revelations (especially from his family) are heartbreaking, what Ig finds out about the people he has known all his life is often shocking but also downright hilarious.  One of the best is a full-out brawl he instigates among the reporters following him with the promise of an exclusive interview.

I do understand where some people have said this gets to be a bit of a mess, but it really never gets off-track or meandering.  Stylistically, it looks like Aja may have found something that fits him, as this is the film where I finally see an auteur at work.  I look forward to seeing if he goes back to being a hired hand or continues in this vein.