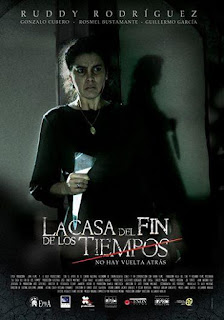 Too often when a movie is represented as one thing and later becomes another you end up with nothing but complete frustration.  For instance, I practically have no use for the "schizophrenic" twist when it comes to supernatural thrillers (especially since multiple personality disorder and schizophrenia are two different things - something Hollywood hasn't figured out yet for the most part).  I also despise Scooby Doo-type endings unless someone actually says a line about meddling kids.

Occasionally, though, we get something that is truly clever.  The Others, for instance, was pretty obvious that the main characters were the ghosts haunting the house, but even figuring that out early on in the movie did nothing to spoil it.  Jacob's Ladder comes to mind as another that had enough going on that the reveal at the end was not a giant letdown.  Now I can add The House at the End of Time to that list.

The film begins in 1981, with Dulce (Ruddy Rodriguez) discovering her husband, Juan José, dead in the basement of their home.  Searching for her son Leopoldo (Rosmel Bustamante), she arrives just in time to see him hauled away by an unknown force.  Entering the catacombs below her house she finds that her son has completely vanished.  She is arrested, charged with the murder of her husband and child, and given a maximum sentence.

In 2011 she is released back to her home under house arrest due to her failing health.  From her experiences 30 years prior she believes the house to be haunted by malicious entities, and hopes to find out what really happened to her son.  Alone and tormented, she is tempted to suicide, but is given new hope by a priest (Guillermo García) who visits her and reveals that he never believed that she actually committed the murders.  Since she is unable to do so he begins to research the history of the house, which turns out was built by an English Freemason in the 1890s in its specific location for unknown purposes.

The film moves back in forth between 1981 and 2011, showing the events that led up to the family strife and her ultimate arrest, and her constant torment by the supposed spirits that inhabit the home.  It soon becomes clear that the dates, usually revolving around November 11, are important and will lead to the key of unlocking the house's secrets and providing Dulce's redemption.

What is always great about haunted house stories is that there is so much that can be done with them in a specific location.  Thus, you can make it as scary as you want without having to reveal much or worry about spending a ton of money on sets.  What you need is a solid and effective story, and The House at the End of Time has that.  There are some flaws - occasional equipment visible and the old-age makeup being too obviously that - but the setting and performances are just what is needed for this kind of tale.

As for the ending, I'm not going to say much except that it isn't a random twist.  It is all part of the story, easy to follow when you think about it, and quite emotional at the conclusion.