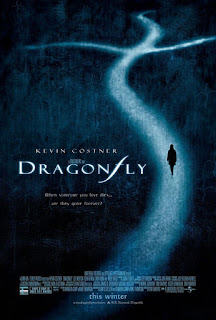 I remember when Dragonfly came out it the previews made it look like it was a somewhat more sentimental version of Flatliners.  I also remember getting it constantly confused with The Butterfly Effect since both were mediocre movies with insects in the title.

Since being burned by Kevin Costner in The Postman, I really haven't paid too much attention to many of the movies he has been in sense.  I liked him most recently in History's miniseries The Hatfields and McCoys, but otherwise I often find him an overhyped actor that I can do without.  He has one good movie as a direct (Dances with Wolves) and a few decent ones as an actor (No Way Out), but by and large I remember him for his biggest disappointments (Waterworld, Robin Hood: Prince of Thieves). It should have not been a surprise that Dragonfly would be a disappointment as well.

Dr. Joe Darrow (Costner) loses his wife Emily (Susanna Thompson) when the bus she is on is pushed into a raging river by a landslide.  Wracked with grief, he pours himself into his job.  He is advised by his superior to take some time off, and agrees to, but decides to visit the children's ward first as his wife had asked him to and he had neglected to do until this time.

He suddenly hears a voice calling to him and sees a young boy being rushed to ICU.  When the boy awakes he tells Joe that he saw Emily on the other side, in a rainbow, trying to give Joe a message.  When he tries to investigate further he runs into opposition from the hospital, so he tries to track down a nun (Linda Hunt) who had been looking into the children's near death experiences.

The messages from his wife tend to involve a strange wiggly cross and about being in a rainbow.  Perplexed, he follows the clues, and begins to think that the messages may not be coming from beyond the grave, but somehow that his wife may still be alive.  Deciding to find out once and for all he strikes out for Venezuela seeking answers.

While Dragonfly has some supernatural elements, it is less this than a typical pile of Hollywood mush.  The ending is so sugary sweet (and with strings swelling as well) that you know this was meant as Oscar bait.  Problem is that by trying to be combine sentimentality, out of place action sequences and the supernatural, the movie ends up being a boring mess that appeals to practically no one.  And, if I remember right, that was the size of the audience that went to go see it.