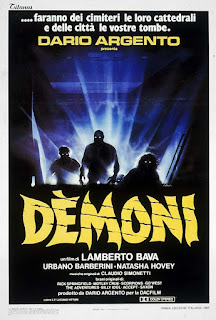 Being the son of one of Italy's most famous directors has to be hard.  Mario Bava had such a particular style, especially after making films in color, that it would be easy to fall into a pale imitation of him to keep the family name going.  And when you decide to team with Dario Argento on writing your film you suddenly have another person whose particular style is known by many.

Fortunately, Lamberto Bava manages to make this film his own.  Some of the primary colors his dad is known for show up, and the movie definitely goes in a number of directions (which is typical of Dario Argento), but in the end Lamberto has his own style.  Despite the different elements he doesn't let trying to get a specific shot overshadow the fact that he is making a horror film, keeping things on track throughout, especially after the action starts.

Which may be where some people have a problem.  He's not trying to create art with Demons, but rather a straight apocalyptic horror film.

Cheryl (Natasha Hovey) is a music student in Berlin who is given a ticket for a movie at a theater called the Metropol by a man with a metal mask.  She asks for two, and convinces her friend Kathy (Paola Cozzo) to skip class and come with her.  Once inside it appears that this is an advanced screening of a movie to promote the renovation and reopening of the theater, with props such as a motorbike and a scary demon mask.  The blind Werner (Alex Serra) warns his companion Liz (Sally Day) not to touch it.  However, Rosemary (Geretta Geretta), one of two hookers brought to the show by their pimp Tony (Bobby Rhodes) puts it on.  She is scratched on the cheek when she removes it.

Meanwhilte, Chery and Kathy draw the attention of George (Urbano Barberini) and Ken (Karl Zinny), who sit next to them as the movie starts.  The movie itself is a horror film about four teenagers investigating an old crypt.  They find a demon mask, like the one in the lobby, as well as a book by Nostradamus warning that whoever wears it will become a demon and spread evil throughout the world.

Rosemary notices that the cut on her cheek is still bleeding and heads to the ladies' room to take care of it.  While there, she transforms, and infects her fellow prostitute Ruth (Nicole Tessier) when she comes looking.  Ruth crashes through the screen and begins to attack moviegoers in the front row, who themselves become demons and begin attacking others.  Everyone else rushes to the entrance to find that they are now walled into the building with no escape.

Thinking that if they shut off the movie they can end the demons and get out, everyone heads to the projection booth and find out everything is automated.  They smash it anyway, shutting off the movie, but it doesn't change anything.  Werner, before transforming, warns them all that it is the building that is cursed, not the movie, and that there is no way out.

Led by Tony the survivors begin to barricade the galleria to keep the demons from attacking.  Despite Tony's urging, George is reluctant to help him toss Liz's body over the railing.  Ken helps, but a zombie crawls up the cord used to hang Liz's lover.  They fight him off, but Liz resurrects and bites Tony, leading George and Ken to toss them both over the edge.

Meanwhile, a quartet of coked-up teenagers driving through the streets of Berlin in a stolen car happen to park in an alley next to the Metropol.  When the cops show up a door opens letting the teenagers in and Werner out.  Werner attacks the cops when they come to investigate, while the teens are almost immediately set upon by demons and turned.

The survivors, hearing gunshots and thinking help has arrived, disassemble the barricades and are immediately attacked.  In the end, George and Cheryl remain alive, and find a means to escape when a helicopter crashes through the roof of the theater.  However, the helicopter itself hints at the fate that awaits them once they rejoin the rest of the world.

I do have to say that Lamberto Bava knew what he was doing when making a horror film in the '80s.  Like Argento he incorporated a number of metal and punk bands (as well as using Claudio Simonetti for the main soundtrack) and eschews outright scares for bloody action, which often borders on the cusp of the ridiculous.

As usual, performances and memorable characters aren't the point - a fact that is quite happily parodied in the movie within a movie, which features horrible acting and tons of gore.  Unlike most Italian horror films Bava is not trying to make some great emotional point.  The garish colors are less to go along with the emotions of the characters and more the fact that for some reason we thought that looked good in the '80s.

Which brings to mind a stumbling block some may have.  It is overtly an '80s film, featuring wild fashions and hairdos that you rarely saw outside of this type of movie.  Also, lots of neon, angles and black lights, which is something you did see often.  This helps make the normality of the four central characters even more striking.