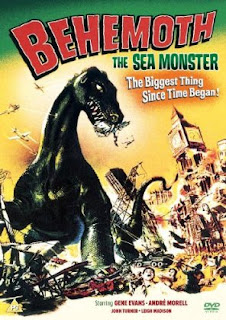 Though they both worked in stop motion, Willis O'Brien and Ray Harryhausen were completely different in style.  People tend to think of Harryhausen has being much more modern, and it is true that his monsters were often more outrageous.  It is also a fact he ended up working on much better films than O'Brien in a lot of cases.

Still, O'Brien was one of the pioneers, and he knew his craft well.  One can see that in the The Giant Behemoth.

When Jean Trevathan's (Leigh Madison) father is killed on the beach while gathering his catch for the day, a follow-up massive fish kill, American scientist Steve Karnes (Gene Evans) cancels his flight back to the States and consults with Prof. James Bickford (Andre Morell), head of Britain's atomic energy program.  At first they find nothing, but investigation of one fish reveals high levels of radiation as well as a strange glowing substance.

Karnes goes out to see to find the monster and catches a glimpse of it, but is called back in when a missing steam ship is found wrecked with all hands missing.  Soon after, a giant footprint is found.  After a consultation with Dr. Sampson (Jack MacGowran), a leading paleontologist, they find out that the creature is a relative of the plesiosaur and is not only highly radioactive do to atomic testing in the ocean, but also has a natural electrical charge that the radiation has enhanced.  It turns out that it is headed up the Thames, straight for London, most likely to die - a bad situation, since it is likely to explode and spread its radiation throughout the city.

The movie is slow to get moving, but once the creature gets to London, it is everything you would expect from a 150-foot (although their diagram says 75) reptile rampaging through a large city and burning people with electro-radiation.  This is the point at which O'Brien and his effects team went all out, even including a decent underwater battle between the creature and a submarine.

Whether you will like this film will largely depend on your love for giant monster movies, as it follows everything to the mark and doesn't really deviate from the normal formula.  And, yes, it does sound and come across as a British version of Godzilla, just with better effects and a different method of killing the beast.