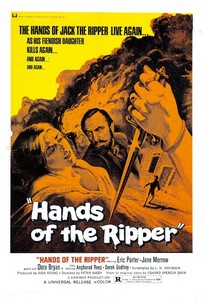 I am always happy when I stumble upon a Hammer film that I haven't seen before.  In this case it's one of the later ones, Hands of the Ripper.  In a lot of cases Hammer's quality had taken a dive by the 1970s, but occasionally a pretty good film emerges.

When Jack the Ripper is pursued through the streets of London he retreats to his home.  His wife suddenly realizes what he is and he murders her in front of their daughter Anna.  Afterward he picks her up, gives her a kiss and abandons her to her fate.

About 15 years later Anna (Angharad Rees) is living with Mrs. Golding (Dora Bryan), a fake medium who uses her for spirit voices and also pimps her out on occasion.  It is on one of these occasions that a member of the House of Commons, Mr. Dysart (Derek Godfrey) gets frustrated with Anna and begins to beat her.  It seems Anna has been entranced with a necklace that Dysart brought for her.  When Mrs. Golding breaks up the altercation and gives Anna a kiss, she hears her father's voice and kills her ward, driving a knife through her and the door.  Dysart flees, but is seen fleeing by Dr. Pritchard (Eric Porter), another attendee of the seance that was aware of the sham that was being pulled.

Instead of informing on Dysart, Pritchard takes Anna in as his own, meaning to use Freudian techniques to study her psyche and see if she can be cured.  However, whenever anyone kisses her, she goes into a murderous rage, killing Pritchard's maid (Marjie Lawrence) and a prostitute named Long Liz (Lynda Baron) before Pritchard acquiesces to Dysart's demands that Anna see a real psychic by the name of Madame Bullard (Margaret Rawlings).

Madame Bullard is able to figure out what is wrong and whose daughter Anna is, and determines that her father's spirit is possessing her.  Unfortunately, the medium is also killed when she gives Anna a kiss on the cheek, a trigger that Pritchard himself finally discovers when Anna runs him through with a sword.  Facing the fact that he has unleashed an unstable murderess upon society, Pritchard uses what may be the last of his life to help his son (Keith Bell) track her down before Anna can kill his future daughter-in-law, Laura (Jane Merrow).

One thing the 1970s saw Hammer do was up the blood and the sex, and they make sure to wedge in some brief nudity as well as a good amount of the claret.  Happily, the story is quite nice as well, although definitely not anything new.  Eric Porter plays the moody (and somewhat stuffy) mad scientist to the hilt, while the movie really gives Angharad Rees a chance to shine, going from a sunny young girl one moment to a driven murder machine the next.