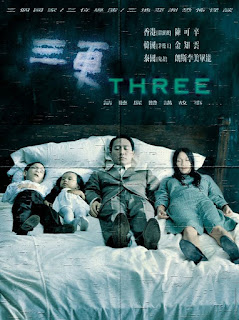 In the grand tradition of thinking that Americans can only handle foreign films (even foreign horror films) if they have some point of reference, we have an instance where the "sequel" was made two years before the movie everyone knows.

Now, yes, it is true that the directors of Three... Extremes are more well-known to Western audiences than the directors in the original.  It is also the better of the two, but not necessarily for what it has but for what it does not have - which is the middle segment of this film.

This collections starts off with Jee-woon Kim's Memories, set in a barely-completed (and barely occupied) housing development in South Korea.  A husband (Bo-seok Jeong) is concerned about his missing wife.  He has constant nightmares about her and is sure that something bad has happened.  Meanwhile, his wife (Hye-su Kim) wakes up in a street after an apparent fall.  Suffering from amnesia, she tries to figure out who she is and where she lives.  Both parties find themselves coming to grip with the truth.

The second segment is The Wheel, from Thai director Nonzee Nimibutr.  Master Tao (Komgrich Yuttiyong) is an aging puppeteer that has placed a curse on his puppets so that no one, especially dancer Master Tong (Pongsanart Vinsin), who covets the puppets, may have them.  He instructs his wife and daughter to drown the puppets, but they die in the attempt, and one puppet is left behind.  Despite the warning of Tao's apprentice Gaan (Suwinit Pamjamawat), Tong proceeds to use the puppet as well as make his own, and the curse takes its course.

The last short is Going Home by Peter Chan.  After losing his wife, a Hong Kong policeman Wai (Eric Tsang) temporarily moves into a condemned apartment complex with his son Cheung (Ti-Fung Li).  Cheung senses something is wrong, and is particularly frightened by a little girl in a red dress (Tsz-Wing Lau) he sees following the only other current tenant, Mr. Yu (Leon Lai).  After Cheung goes missing, Wai suspects Yu and sneaks into his apartment, only to be knocked out and tied up.  It turns out that Yu is an expert in Chinese medicine whose wife, Hai'er (Eugenia Yuan) has died.  However, her time of resurrection is coming up within the next few days, and he must keep Wai so that the plans for her revival can go uninterrupted.

From a technical and directorial aspect, Memories is the most proficient.  Jee-woon Kim's use of extreme light and shadow and a harsh modern (yet still decaying and desolate) landscape mesh well with the underlying mystery of the story.  There are some genuinely creepy moments, but really no surprises.  If you are familiar with Asian horror (or with modern horror films in general), you can pretty much figure out what is going on near the beginning.

The true winner here is Going Home.  Minimal cast, great older decaying urban settings and underlying themes of love, hope and loss permeate throughout.  Some reviews I have read found it confusing, but it goes out of its way to wrap up all the loose ends and make it clear why Yu and Hai'er take the steps they do.

Where the series stumbles, however, is with The Wheel.  I was looking over Nonzee Nimibutr's filmography, since this is one director I am not familiar with.  It turns out that generally he directs dramas and action films rather than horror.  I know that the movie is trying to represent different directors from Asian countries and different versions of what they find frightening, but his inability to handle a horror theme shows.  Basically it's your typical cursed puppet story, only in a remote village in Thailand rather than a killer dummy in a seedy part of Las Vegas.  Where the short pieces in both anthologies largely carry some deeper meaning and beautiful imagery, we get a straightforward scare piece that doesn't even do that job right, nor does it give us any real characters to care about.