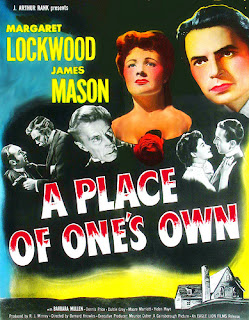 While known for Hammer Studios and a number of classic horror films from the 1950s through the 1970s, older British horror was quite a bit more reserved.  Not a problem, since there is always room for a good haunted house tale.

It is 1900, and Mr. and Mrs. Smedhurst (James Mason, Barbara Mullen) have put away a good nest egg from their drapery business and have decided to retire to the English countryside.  They purchase an estate called Bellingham House that has a bit of a reputation of being haunted.  Of course, Mr. Smedhurst will have nothing to do with such nonsense.

However, when they take in the young Annette (Margaret Lockwood) as a companion for Mrs. Smedhurst, their lodger begins to sense a presence trying to take her over.  It's small at first, and even her Dr. Selbie (Dennis Price), her soon-to-be fiance, ignores it.

It is when she is completely overcome by a wasting disease that Dr. Selbie cannot diagnose that he and Smedhurst begin to face the fact that there is something otherworldly affecting Annette, and the only cure may be a figure from the ghost's past.

As can be expected from a British production in the mid 1940s, this is done on an extremely low budget and resembles a stage play as much as it does a movie.  There are really no scares, but rather a sense of atmosphere and foreboding reflected in the Smedhursts, Annette and their servants throughout.  It is a slow progression, but with a satisfying finale.

As for the actors, James Mason shines in this, chewing the scenery every chance he gets.  It would be nice of Annette was more developed, since her relationship with Dr. Selbie parallels in some ways the life of the ghost that tries to possess her.  Still, Margaret Lockwood and Barbara Mullen are great as the female leads, and surprisingly the script makes it clear that there is a danger in not listening to your wife, despite all the predictably Victorian things that are said about women throughout.