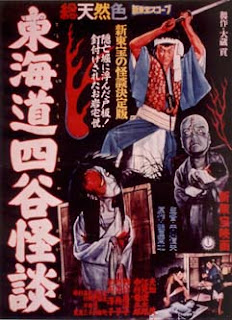 Typically when I think of older Japanese horror films I think of a movie like Kaidan.  They are wonderful works of art and visual style, but the style often overtakes the story and, for someone who is not Japanese (especially 50 or more years removed), there is a lot that is lost in translation.

Not so with The Ghost of Yotsuya.  While based in Japanese folklore, and still reflecting some film making styles of its time, the pacing is much more like a modern Western horror film.

The story takes place in Edo, where a young samurai named Iemon Tamiya (Shigeru Amachi) wishes to marry Iwa (Katsuo Wakasugi), the daughter of of another samurai of higher rank, Hikoemon Sato (Arata Shibata).  When Sato refuses the marriage and insults Iemon, the younger man flies into a fit of rage and kills Sato and his guards.  This, however, is witnessed by Sato's servant Naosuke (Shuntaro Emi).  Iemon makes to kill Naosuke, but Naosuke comes up with a plan to cover up the murder by claiming it was done by another samurai named Usaburo (Yozo Takamura).

Iwa, her brother Yamoshichi (Ryuzaburo Nakamura) and sister Sode (Noriko Kitazawa) swear vengeance.  Iemon and Naosuke pledge to help, with Naosuke having designs on marrying Sode. However, their plan will only come together if Yamoshichi is out of the way.  They manage to lure him away from his sisters, stab him and throw him over a waterfall.  Returning to the sisters, they claim they were surprised by Usaburo and their brother was killed.

Time passes and Iemon and Iwa are married and have a son. Naosuke and Sode also marry, but she refuses to consummate the marriage until proper vengeance has been taken upon Usaburo for her father and brother.  Iemon's gambling habit soon has him in debt to a number of people, including a masseuse named Takuetsu (Jun Otomo), who secretly craves Iwa.

Opportunity to make more money comes when Iemon defends the honor of Ume (Junko Ikeuchi), the daughter of the powerful and rich lord Kiemon Ito (Hiroshi Hayashi).  Ito is desirous of a marriage between Ume and Iemon, and Iemon is desperate to get a hold of the money that comes with it.  Ever the schemer, and looking to get a taste of the money by blackmailing Iemon, Naosuke suggests that it be set up to appear that Iwa was having an affair with Takuetsu.  While Iemon refuses to kill her with his sword, Naosuke acquires poison that can be used to do away with her.

Iemon invites Takuetsu to his home with the promise that Iwa will be compliant and, shortly before leaving, gives her the poison, which soon causes her skin to rot and hair to fall out.  Cursing Iemon and declaring that she shall have her vengeance, she dies and takes their son with her.  Returning home, Iemon kills Takuetsu, and with the help of Naosuke ties both bodies to shutters and dumps them in a lake.

Now free to marry Ume, he does so quickly.  However, Iwa and Takuetsu's spirits have other plans, and it may not be too late for the living to take revenge as well.

For those used to the more dreamy style of most Japanese directors of the time, or the John Ford-style often favored by Kurosawa, this will come as a bit of a surprise.  Nabuo Nakagawa keeps things tight, with a short running time, and once the scares do come he knows how to employ them.  Shigeru Amachi does well as a sympathetic villain who desires honor and wealth while not understanding how to truly achieve either, while Shuntaru Emi is great as the devil on his shoulder that pushes him further than he would go on his own.  The rest of the cast, while solid, are meant to play integral parts rather than true characters, as there isn't much time for extraneous development.

Also to be praised is the makeup, which goes beyond what is normally seen in a movie from its time.  Iwa makes a memorable ghost because of the way she dies, with half her face eaten away and her hair pulling skin away from her scalp.  The job looks like effects Tom Savini would use over a decade later.