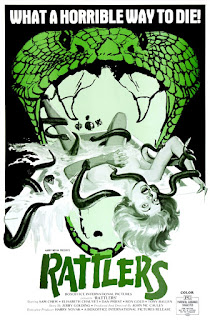 Jaws set the tone for a whole genre of "nature goes wild" films in the 1970s.  By the time the decade ended, nature had turned loose not only sharks but grizzly bears, bees, piranhas, worms and frogs.  But, what about the snakes, you ask?  Well, that is just what was attempted with Rattlers.

After two boys are killed while hiking, herpetologist Tom Parkinson (Sam Chew Jr.) is brought in to help the Mojave County Sheriff's Department investigate.  Sheriff Gates (Tony Ballen) informs him that the snakebites found on the kids are similar to those found on an old prospector who had recently been found.  While confirming that the bites did indeed come from snakes, further investigation turns up nothing and Dr. Parkinson returns to Los Angeles.

Within a week an entire family and the livestock are killed by the snakes, so the Sheriff once again calls on Dr. Parkinson's expertise.  This time, however, he is teamed with freelance photographer Ann Bradley (Elizabeth Chauvet), who is tasked with documenting what is found.  The deaths continue, allowing Dr. Parkinson to trace a pattern leading back to Fort Walton, a local Army base that doesn't see much use.

With the blessings of the Colonel (Dan Priest) in charge of the base, Parkinson goes searching by helicopter while Ann checks out a spot where the death of a corporal occurred prior to the other attacks.  Dr. Parkinson learns from the helicopter pilot (Dan Balentine) that recently a barrel containing an unknown substance was sealed up in an abandoned mine shaft.

When confronted with the information the Colonel is no longer willing to cooperate, but Tom and Ann continue to investigate, learning that the barrel contained a nerve gas that has made the snakes unnaturally aggressive.  Now they must find a way to kill the rattlesnakes and prevent further death as well as deal with the Colonel, who is becoming increasingly unraveled.

It is obvious that this was hastily thrown together because there wasn't a good "snakes kill people" movie out yet.  It follows the usual plot points, with a little bit of awkward discussion about feminism thrown in.  The centerpiece, where snakes attack a woman in her bathtub, falls rather flat.

While watchable, that could be said for the rest of the movie.  The leads are unengaging and the snakes themselves are less that frightening - especially when it's obvious that the snakes interacting with the actors are usually not rattlesnakes, and the shots of the actual rattlers are either in an aquarium or a controlled environment.

The other thing this lacks that even the worst of the other movies has is a convincing middle part where the snakes attack a major population prior to the final battle.  I kept expecting a true urban area (or at least a small town) to be put in danger with a massive body count, but this never materializes.  It's a shame because it would have otherwise livened up what in the end is a rather dull film.