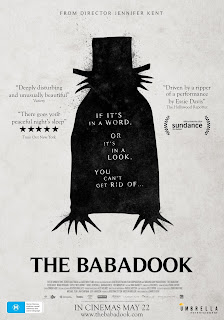 Every once in a while there is a horror movie that comes along and actually changes things.  That is quite hard to do since horror movies, even some of the most imaginative, rely on certain formulas.  Some of those formulas are in The Babadook, but largely because you can eschew everything that has come prior.  What it change is sometimes brilliant, sometimes frustrating, and in the end makes me feel apprehensive about the slew of movies that will copy it (not to mention the inevitable Hollywood remake).

Samuel (Noah Wiseman) is a precocious child who is into magic and building contraptions in order to kill the monster he believes is stalking him.  His mother Amelia (Essie Davis) is at her wits' end.  Samuel's father Oskar (Benjamin Winspear) died driving her to the hospital the night Samuel was born (a fact the kid is willing to blurt out to anyone), leaving her a single mother with a job in a nursing home.  Samuel's behavior also doesn't leave her much time for sleep or any type of social life.

When he brings a homemade crossbow to school, the principal and teacher explain to her that it has come to a point that he be assigned a monitor and separated from the rest of the students.  Unwilling to do that, Amelia pulls him out of school temporarily until she can find a new one.  Suddenly not even having that little relief from Samuel is hard to bear, as he is also a bone of contention with her sister Claire (Hayley McElhinney), who thinks that he is too dangerous to play with her daughter Ruby (Chloe Hurn).

Things take an even darker turn when Samuel has his mother read a strange book that has shown up on his shelf called Mister Babadook.  It tells the tale of a seemingly mischievous spirit who asks to be let in and, when you do, reveals itself to be a monster.  Samuel, already afraid of monsters, begins to think the Babadook is his monster, and that it is trying to take over his mother.  Amelia hides the book and then tries to destroy it, resulting in it returning to her doorstep with extra pages that show her murdering her dog, her child and then cutting her own throat.

She burns the book, but continued isolation in her house with only Samuel for company, as well as mounting evidence that the Babadook is real and trying to possess her, take its toll.  However, Samuel has been prepared for this, and plans to fight the Babadook and get his mother back.

There has been some frustration voiced that the Babadook himself is never fully seen anywhere in the movie.  I think that is part of the attraction.  It is a tactic that was used effectively by H. P. Lovecraft (despite all the figures and plush toys, Cthulhu is never truly described in any of stories).  When you hint that just the sight of something may drive you mad, and you actually show it on screen, you get a situation like in Night of the Demon where, good movie aside, the monster itself fails all expectations.  Writer/director Jennifer Kent knows this and leaves much to the viewer's imagination.

Besides, it could be said that the book itself is the real monster, since even though there is the usual child's monster on the periphery, nothing begins to take shape until the book puts the idea of the Babadook in Samuel and Amelia's heads.  Which leads to a broader question - is it all in their head?

Amelia has certainly been through trauma and, in her isolated and sleep-deprived state (as well as suffering from depression), the Babadook could be an outward expression of the urges she tries to suppress.  Samuel could easily see these changes in her mother not necessarily being because of his behavior, but rather because a monster is controlling her.  One of the main lines from the book is, "You can't get rid of the Babadook."  Such is true when mental illness rears its ugly head; you can suppress it, beat it back so it is controllable in some ways, but it is always there.  Deny it or treat it like it is inconsequential and it only gets stronger.

In the end the movie doesn't tie it up that nicely.  No big monster reveal, no sudden cheesy "it was her all along" garbage and, thankfully, no use of loud noises for jump scares.  The true power, and the true difference with The Babadook, relies in the fact that we know no more what is going on than Amelia and Samuel do.  Because, in reality, we rarely do.