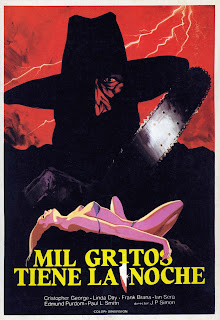 This is going to be one of the places where I break from most horror fans.  I have wanted to see Pieces for awhile.  I have a cheap DVD set that it is on, but never watched it because I heard that particular version was horribly copied and cropped to where you couldn't tell what was happening on screen.  So, I waited.

As I waited this kept coming up in discussions as being one of those obscure European grindhouse films that just has to be seen.  Also, it had a reputation as being one of the superior films in the slasher genre.

Well, the wait is over, and I can definitely say I cringed through most of the movie.  Unfortunately, it had nothing to do with any of the violence.

In 1942 a young boy is putting together a pornographic puzzle.  His mother (May Heatherly) discovers him doing it and threatens to burn it as well as any other "filth" he may have about.  This leads him to chop her into pieces with an axe.  When the police show up he hides in a closet and claims someone broke in and killed his mom and attacked him.

40 years later a chainsaw killer is loose on the campus of a Boston college.  Lt. Bracken (Christopher George) and Sgt. Holden (Frank Braña) are investigating, but despite the cooperation of the Dean (Edmund Purdom) and mounting evidence that either Profressor Brown (Jack Taylor), who teaches anatomy, or a groundskeeper named Willard (Paul L. Smith) may be the perpetrator, they are unable to solve the crimes.  To lure him out they put professional tennis player (as well as police officer) Mary Riggs (Lynda Day George) undercover as the school's new tennis coach.

Kendall (Ian Sera), who was the boyfriend of one of the victims, quickly goes from being a suspect to being a trusted source and is asked to keep an eye on Mary.  He is more than happy to, and seems to take to the tasks the police give him as the bodies pile up and they become more and more baffled.

The killer, meanwhile, keeps hacking up women.  It seems he's kept his old puzzle after all these years and is building his own dream girl - piece by piece.

I can say that the gory parts did not disappoint.  There are some effective scenes throughout (the topless tennis player being chased through the locker room and sawed in half comes to mind), and this is where the film suddenly comes into its own.  Also, the musical score is absolutely fantastic.  Unfortunately, there are long periods where the story has to be expounded on, and this makes the movie a trial to get through.

While Lynda Day George yelling "BASTARD!" repeatedly at the top of her lungs in hilarious, too much of the dialogue and acting (especially the horrid dubbing) is so below standard it renders a good portion of Pieces unwatchable.  It is obvious that the filmmakers went to great lengths to come up with a story to string together a number of murders that, in any other horror film, would have been amazing.  Too bad barely giving a second thought to dialogue sank this.  Keep in mind, I say this as someone who has seen plenty of bad movie with horrible writing that, in the end, I have found much to rave about.

So, if you are going for boobs and blood, Pieces does deliver.  I wouldn't believe all the reviewers who say it has a great story or that it's an above-average slasher.  Hell, this even has loud noises for jump scares - twice.  There is so much better out there than this.