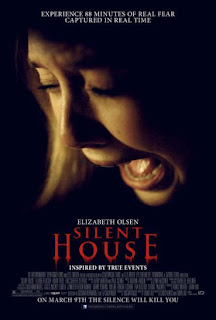 I typically try to see the original film before I watch remakes.  In this case, I didn't know that Silent House was a remake of a Uruguayan film called La casa muda.  I also had no idea who Elizabeth Olsen was, and that probably would have turned me off to watching it if I did.  The Olsen Twins (of which she is a younger sister) were about as annoying at their time as the Kardashians are now, and rather than rage much about the low points of our culture, I just tend to put it out of my mind.

Surprisingly, Elizabeth Olsen is pretty darn good in this.  In fact, she is really the only part of the movie that really stands out.  I know some people have tried to right it off as her jiggling and making faces for an hour and a half, but she really puts her all into the performance of Sarah.

Sarah has joined her father John (Adam Trese) and uncle Peter (Eric Sheffer Stevens) in clearing out an old family vacation home prior to selling it.  While the men investigate a potentially dangerous mold situation, Sarah meets a girl names Sofia (Julia Taylor Ross) who claims to have been a childhood friend.  Sarah doesn't remember her, claiming she has some "holes" in her memory.

John and Peter have an argument, with Peter taking off in his truck to cool off.  Shortly afterward, Sarah hears someone moving around upstairs. She and her father go to investigate, finding nothing at first, but soon after they are separated he disappears and Sarah begins to be stalked by an unknown man (Adam Barnett) and see visions of little girl (Haley Murphy).  After finding her father knocked out on the floor, she struggles to find a way out of the house, finally escaping and meeting Peter on his way back.  She tells him what happened and, instead of going to get help, he decides to deal with the intruder himself.

Sarah is instructed to stay in the truck, but flees back into the house when she sees someone get into the truck from the back.  Once again trapped, she attempts to find Peter but is again confronted by the intruder, which leads to a chase throughout the decaying home and a number of visions that lead her to a realization of what is truly happening.

Directors Chris Kentis and Laura Lau went with a trick that is becoming more popular, which is doing the movie seemingly all in one take.  This works well with a creepy, ill-lit house, but doesn't change the fact that the viewer will probably guess what is happening quite early on.  Despite the performance, atmosphere and experimentation (which I take it was also done in the original), the fact is that the plot has been done so many times and, when it comes to a haunted house film, it's always a cop-out.  What I understand is that the original follows about the same route and is just as disappointing.

It does lead one to long for the good old days when these movies concentrated on being more scary and entertaining rather than trying to be high art.