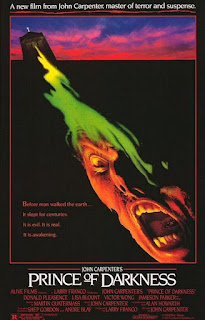 If someone goes by the reputation of John Carpenter's films today they would think he was on the same level as Steven Spielberg with his string of successes.  The Thing and Big Trouble in Little China are two of the most talked-about, and most reacted-to, films on YouTube.  The sad truth is, however, that almost no one saw them until they came out on cable and video.  The critics, who now stumble over themselves to praise its effects and atmosphere, lambasted The Thing as an example of everything that was wrong with horror films in general.
While he had some moderate success with Christine and Starman, Carpenter had pretty much had it with dealing with major studios failing to properly promote his movies, as well as critics like Gene Siskel and Roger Ebert who thought it was their duty to act as gatekeepers for what the United States could see.  While highly regarded for their reviews the truth is the two of them were as bad as the MPAA, and it still befuddles me to see the cowriter of Beyond the Valley of the Dolls advocating censorship.  Carpenter would eventually, by the 2000s, walk away from it all, but at this point he turned his back on the studios and went back to making low-budget independent films.
The company he worked with was called Alive, and he made two films for them: Prince of Darkness and They Live.  He enjoyed full artistic freedom to go in any direction he wanted with both.  The latter was the more successful, and more influential, of the two, with Prince of Darkness unfortunately having the reputation of one of Carpenter's lesser films.  It is true that it has its flaws, but it also is quite ambitious in what it tries to do.  Carpenter manages to keep his ambitions within the budget, creating a smart, and often suspenseful, combination of sci-fi and horror.
When a priest passes away in an abandoned church in Los Angeles, another priest (Donald Pleasance) is given access to the secret that was being guarded.  He contacts Prof. Howard Birack (Victor Wong), an expert in quantum physics, to assist him, and Birack enlists other scientists as well as his students to put together a study of the object that was found in the church.  It is an ancient cylinder filled with a green liquid and accompanied by a 2000-year-old book explaining what it is and what it contains.
It turns out the cylinder is much older - to the tune about about seven million years - and the book was written by Jesus himself, describing how what is contained is Satan, the son of Father Satan, who had ruled the Earth before humanity.  Father Satan was banished to another dimension, while Satan itself was imprisoned.  Jesus, before his death, entrusted his followers to keep it secret until mankind could find a way to defeat the evil within.  Unfortunately, radiation from a distant supernova has caused the being inside to begin waking up.
The idea of our myths being inspired by alien beings isn't new, and John Carpenter, who also wrote the film under the alias Martin Quatermass, isn't trying to belabor religious points.  Rather he is looking at gods and devils as being similar to particles and anti-particles, existing in different universes, and also existing beyond the knowledge of man.  There may not be twisted, tentacled monsters in Prince of Darkness, but the idea of these forces at work - both on micro and macro levels - independent of the control of human beings is a key to what made H. P. Lovecraft's monsters so frightening.
Most of the action takes place in the church and secret underground area that contains the cylinder.  Outside a number of homeless people (led by Alice Cooper), under control of the being within, patrol the grounds, keeping the scientists trapped.  While not as well known as the music to Halloween, Carpenter's score for the film is one of his more memorable ones, while the story unfolds in a deliberate and sometimes unpredictable fashion.  There is one bloody scene, while many of the others, save the makeup work toward the end, being more restrained, leaving the focus on the atmosphere of the film.
The issues I have with the film is that at times, especially in the beginning, the pace is too deliberate.  The opening credits go on way too long, taking up a good 15 minutes, cutting in and out of introducing the characters and the subject matter.  Also this is not his best dialogue, and some of what is supposed to be frightening just comes across as silly, particularly the whole "You will not be saved" sequence on the computer screen.  Another is a line spoken by Frank Wyndham (Robert Grasmere) calling the whole research project "ca-ca."
The cast is an ensemble, with the Priest and Burik taking a backseat after awhile to love interests Brian (Jameson Parker) and Catherine (Lisa Blount).  Dennis Dun plays a student named Walter and is there for comedy relief, but unfortunately his character is rather grating.  A lot of the others are there to become possessed or killed off as it becomes more clear what Satan intends to do the moment he can get himself out of captivity.
Prince of Darkness may be the one of the weakest of Carpenter's hot streak from Halloween through They Live, but it is still a great horror film that, even then, probably would not have gone forward if he wasn't doing it on his own.  It does kind of simplify particle and quantum physics for the layman, but it also doesn't sound like a lot of technobabble, and the scientific aspect tends to make this feel a bit more real than other similar supernatural stories.
Prince of Darkness (1987)
Time: 102 minutes
Starring: Jameson Parker, Lisa Blount, Donald Pleasance, Victor Wong, Dennis Dun
Director: John Carpenter