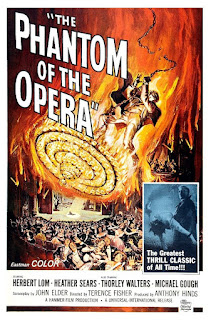 While Hammer Studios had their share of great original movies they largely garnered a reputation for remaking the old Universal horror films, often with the plots greatly altered and with much more blood and a heaping helping of heaving bosoms.  They were a film production company that figured out how to be trashy and classy at the same time, so it is no surprise that some of the attributes we apply to the original menagerie of Universal movie creatures often comes from mixed memories of the originals and the Hammer remakes.
The 1925 version of The Phantom of the Opera was pretty much a faithful adaptation of Gaston Leroux's novel, while the 1943 version seemed to have retained as little as possible in order to be able exercise Universal's ownership rights to the story.  By the time the Hammer adaptation came around the action no longer was in Paris, but at an opera house in London, and this time we actually get the scene of the Phantom at his organ playing Bach's "Toccata and Fugue in D Minor".  In the 1925 version he had been playing "Don Juan Triumphant", while in the 1943 version it was a concerto he had written specifically for the heroine, Christine.  We do get more of the latter here, but that ultimate piece of music, which has become inextricably linked with horror films, is played by the Phantom for the first time here.  It had previously been used as the opening music for the 1931 version of Dr. Jekyll and Mr. Hyde, so its horror bona fides had already been established over 30 years before.
Joan of Arc, a new opera written by Lord Ambrose D'Arcy (Michael Gough) is set to premier at the London Opera House.  However, everything that could go wrong is.  Music has been torn up, instruments damaged and playbills slashed.  The ultimate event is a murder that interrupts the premiere, causing the leading lady (Liane Aukin) to decide she's not only vacating the opera, but England itself.  The investigation, and the search for a new tenor, shuts the play down indefinitely, leaving D'Arcy enraged and producer Harry Hunter (Edward de Souza) frustrated.
Into this fray comes Christine Charles (Heather Sears), who appears perfect for the role.  That is, until she rebuffs D'Arcy's attempts to "seal the deal" on her contract.  She and Hunter soon find themselves without jobs, but on the trail of a mystery: the theater is said to be haunted by a Phantom (Herbert Lom), and he seems to have taken a liking to Christine.  The Phantom also seems to have a bone to pick with D'Arcy, and thus the attempts to ruin the show.  While it seems that the Phantom's intentions may be pure, though misguided, he has picked up a dangerous benefactor that will do anything to protect his  interests.
There is no attempt to call the Phantom Erik (or Erique) this time around, no Raoul, no Ledoux, and Christine's last name has again changed.  There is still a chandelier sequence, and this time the makeup on the Phantom is much better than it was on the 1943 version, but still pales in comparison to Lon Chaney's original.  Some elements, including the theft of music, still carry over from the 1943 version, but Hammer as usual has taken the bare bones of the original story and changed it into something completely different.  Unfortunately, unlike many of their other Universal adaptations, this time around audiences weren't as keen to take to the theaters, leaving director Terence Fisher (who had been responsible for most of the studio's most memorable films) on the outs with Hammer for a number of years.
That's a shame because, even though it never reaches the height of the original, it is still a fine Hammer production with Edward de Souza and Heather Sears having a fair amount of chemistry to carry off a convincing romance and Herbert Lom being a sensitive, rather than criminally insane, Phantom.  He also this time around is merely interested in Christine for her vocal talents.  It is kind of weird to dismiss that, whether he had ordered it or not, his dwarf companion (Ian Wilson) still murders a number of people.  It is one of the major flaws in the story that both Christine and Hunter are willing to ignore these facts in light of the injustices that have been done to the Phantom, so the end of the movie starts to get a bit muddled.
Still, the opera part is toned down, with the only major production coming toward the end, and although it is a bit tame for a Hammer film the horror element is still emphasized, particularly in a couple of the kills as well as the set design in the Phantom's lair.  While the dwarf does a lot of the killing, the true bad guy throughout is the lecherous, amoral D'Arcy, and Michael Gough obviously had a great time hamming it up while playing him.
While it may not be as good as the original, the 1962 version of The Phantom of the Opera is still much better than the 1943 attempt, and is definitely one of the better Hammer films to revisit.  I just wish that the end had been tightened up a bit.  It's not like the Phantom and his companion don't ultimately pay for their crimes, but it's less moral ambiguity and just motivational confusion that undercuts this at the end.
The Phantom of the Opera (1962)
Time: 84 minutes
Starring: Herbert Lom, Edward de Souza, Heather Sears, Michael Gough, Ian Wilson
Director: Terence Fisher