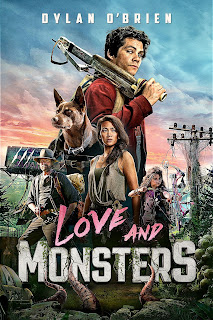 Halloween 2020.  Our "two weeks to slow the spread" in March was still in swing in October, thanks to a number of different factors and, though occasional big event films like Tenet were starting to make it into the theaters, few people were going.  Even a lot of people like myself, who weren't as worried about getting sick, thought sitting in an enclosed space with a bunch of strangers for two hours might just be too much like poking a sleeping tiger.  People were supposed to keep their masks on the entire time, but people are people and, personally, I saw no reason to sit in a theater with a mask when there were plenty of movies I could watch at home without one or my pre-movie entertainment being some old guy berating a 16-year-old about the Constitution.
Those things should have gone through the mind of whoever it was that decided to release Love and Monsters in the manner they did.  It was released as video on demand but, unlike Bill and Ted Face the Music, this wasn't a long-awaited return of a franchise.  This was an independent film, made on a surprisingly low budget, with an original concept that, if given wide release at the right time, would have easily turned a huge profit.  Instead of streaming on a service, though, it was either pony up $20.00 and take the chance of it being crap or hope it was playing at a theater near you - which was trying one's luck because most cities and states still had theaters shut down
The other thing they could have done is sit on it for another year.  I had been frustrated that No Time to Die wasn't just going to stream at some point but, financially, it appears the right decision was made.  Same goes for Black Widow, Free Guy and a number of other event films.  In hindsight I am sure that Paramount wishes they had sat on this one, too, as it is the type of movie that shows independent filmmakers can compete and that it no longer takes the budget of a Marvel film to make a great action movie. Unfortunately, because of their bad decisions, it made next to nothing despite topping VOD rentals when it came out.
Joel (Dylan O'Brien) has been living in a bunker with a group of people for seven years.  During that time, due to a problem he has with freezing up when encountering danger, he has found his niche as a cook and a repairman.  However, after contacting a number of survivors, he has located his girlfriend Aimee (Jessica Henwick) at another colony 85 miles away.  Unfortunately, what would have been a day trip years before is now a seven-day trek across a post-apocalyptic world where every cold-blooded animal - amphibians, fish, reptiles and bugs - has been mutated by chemicals that rained down on Earth from the rockets that were used to destroy an asteroid that was on a collision course.
During his travels Joel meets Clyde (Michael Rooker) and Minnow (Ariana Greenblatt), two survivors heading for the relative safety of a mountain area, as well as a dog named Boy who becomes his pemanent traveling companion.  He soon learns how to survive on his own, long enough to find Aimee's colony, of which she has become the leader.  The colony itself also appears to be on the verge of rescue by a man known as the Yacht Captain (Dan Ewing).  Unfortunately, after the years apart, the gap between Joel and Aimee may be more than just a physical distance, and things aren't exactly going well back at his old bunker.
This has received some comparisons to Zombieland which, other than a weakling with no survival skills finding a mentor in an apocalyptic wasteland, there's not a lot of comparison.  That part is only the middle and, after learning what he needs to know, they split up.  No searching for Twinkies or such, but just an emotional parting of ways so that the story gets on.  It is a bit disappointing since it is refreshing to see Michael Rooker in an actual good guy role rather than a villain or an antihero.  I also appreciate that end of his quest is not the end of the movie and that, despite his Joel's idealistic vision of what is supposed to happen, it is quite a bit more realistic.  It also sets up a great final battle sequence as well.
We are introduced to quite a number of creatures in Love and Monsters, from giant frogs and ants to whatever it was the sand gobblers mutated from.  The effects team, led by Toby Barron, did a wonderful job of bringing these creatures to life.  In most big-budget movies these creatures look like video game characters and often can't even get the simplest movements that right that the engine for something like No Man's Sky is able to do effortlessly.  While the idea of a lot of the invertebrates featured growing to those sizes is scientifically impossible - they're larger than they were even when such megafauna existed - at least they look somewhat like, and move, like they would be expected to if it was a possibility.
The reason why Love and Monsters works is because, even though there is nothing scientifically plausible about it, right down to the premise of "rocket chemicals" causing the mutations, the setup is just to create a world to tell the basic story of the everyman who faces danger and grows through his encounters.  It may be as old as our ability to tell the story, but there is still a reason it woks when told well.  Here it works quite well and, like the best tales, it ends when it's supposed to.  I guess a sequel could be made, but since Joel's real journey is over, I'm satisfied.
Love and Monsters (2020)
Time: 109 minutes
Starring: Dylan O'Brien, Jessica Henwick, Michael Rooker, Ariana Greenblatt, Dan Ewing
Director: Michael Matthews