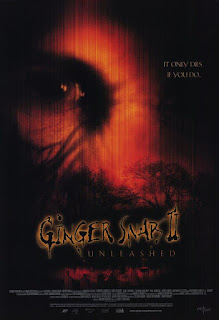 Ginger Snaps was a strange, sometimes humorous werewolf film involving two outcast sisters trying to deal with one (Ginger, of course) becoming a werewolf.  It was written by Karen Walton and put a more allegorical twist on monthly cycles and changes in life in general.  There were the usual horror elements, but there was also the bond between sisters and a lot of references to what a woman goes through entering puberty.  I, obviously, have no point of reference for the latter, but the humor and the fact that this was a completely different take on the werewolf story got me liking it more than I thought I would.  It's also not a Canadian werewolf version of Twilight, which was a relief.
The next movie didn't come out until four years later, and both the direct sequel and prequel were filmed at the same time, albeit with different directors.  Karen Walton also didn't continue on with the story, but instead Megan Martin was responsible for the second part which follows up on what happens to Brigitte (Emily Perkins) after she injected some of Ginger's (Katherine Isabell) blood in order to help defeat her in the first film.  When we first find her she is living a life similar to addict, injecting monkshood into her veins to slow down the change.  Unfortunately that isn't keeping a male werewolf away, as he has caught her sent and is wanting to mate.
Because of her constant state of almost changing as well as her physical appearance, Brigitte is picked up after passing out in the snow and placed in a rehab center run by Alice (Janet Kidder).  There she befriends a young, bullied girl named Ghost (Tatiana Maslany) who is awaiting placement in foster care.  She also has to deal with a pusher named Tyler (Eric Johnson) who provides the girls at the center with illicit substances in return for certain favors.  With her supply cut off and the werewolf stalking the grounds she hopes to escape before her final change begins, but it may already be too late.
This time around, instead of puberty, I believe that Martin meant to continue with allegories of being an adult living with a bad childhood and addiction.  Unfortunately, the addiction side of the supernatural works better in a film like the appropriately named The Addiction, which equates vampirism with drug dependency.   In most movies and stories vampirism is initially a choice that leads to bad consequences, where lycanthropy is an actual curse and, often, passed down by family.  In the Ginger Snaps universe it doesn't mean changing back and forth on the full moon, but an irreversible change from human to animal, with little memory of what one once was.
The part that works is exploring early adulthood and the problems women face, largely this being a story of a lady being stalked by an unwanted suitor, especially a young woman still trying to deal with childhood traumas.  While everything is done, from giving her a drawn, strung-out look to her unhealthy thinness, to make her look like an addict, she is really using the monkshood to not become the thing she most fears - i.e., to break free from what has become a family curse, as well as to not be prey to male animalistic instincts.  The dynamic of not wanting to become the worst parts of your family works well, especially as she tries to be helpful to Ghost, who is treated similarly to the way Brigitte and Ginger were.
What I really appreciated toward the end, however, was a major sense of misdirection.  Multiple enemies are set up; the male werewolf, Tyler and the oncoming change.  However, the real enemy never emerges until the finale, which I can definitely say is one of the saddest I've seen.  None of these films have sincerely happy endings, but this one is probably the most effective, especially after the sacrifices that Brigitte made in the first.
It's not as good as Ginger Snaps, but it is a worthwhile sequel despite its flaws and also despite the fact that it has a lot of stock characters.  It is also a little misleading, as Katharine Isabelle only shows up as a figment of Brigette's imagination in this one.  It's that stock character aspect, though, that helps with the misdirection in the story.  The fact that the third one is a sort of prequel rather than a continuation of the story also adds to the sadness of this story, but I don't know how it could have gone forward without getting into the realm of camp or having to explain way too much to make it enjoyable.
Ginger Snaps II: Unleashed (2004)
Time: 94 minutes
Starring: Emily Perkins, Tatiana Maslany, Brendan Fletcher, Katherine Isabelle
Director: Brett Sullivan