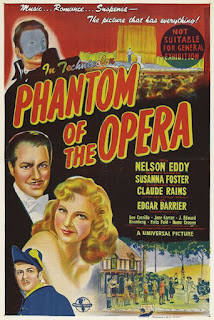 The 1925 cinematic adaptation of Gaston Leroux's The Phantom of the Opera was one of early Hollywood's biggest blockbusters, largely due to the performance and makeup devised by its star Lon Chaney.  Although it had all the hallmarks of a horror film it still had the feel of a detective novel, which was Leroux's specialty, and contained elements that were inspired by his years as a journalist in Paris.  It did receive a revival in 1929 with some added sound sequences, and was planned to have a sound version made in the 1930s, much like many of Unviersal's other classic monster films from the silent era.
For various reasons that didn't happen.  Because the Phantom, Erik, was not necessarily a supernatural creature and opera was involved Universal tended to treat the property with a bit more prestige than Frankenstein or Dracula.  Still, by the 1940s, that didn't keep Universal from initially planning to reintroduce the Phantom in a tale involving either the Three Stooges or Abbott and Costello.  Even without comedians, by the 1940s most of Universal's horror properties had devolved into self parody, so it is surprising that once everything was worked out and Arthur Lubin was set to direct, the second filmed version of The Phantom of the Opera went all out with another prestige production hoping to clean up at the Oscars.  Nelson Eddy, a popular singer at the time, was cast as one of heroine Christine Dubois's love interests, while veteran horror actor Claude Rains played the Phantom.
When Erique Claudin (Rains) is dismissed from the Paris Opera he is desperate to find a way to keep funding lessons for Christine (Susanna Foster), an up-and-coming soprano that he is secretly in love with.  He attempts to sell a concerto he composed and, mistakenly thinking the publisher has stolen it, confronts him.  This results in the publisher's death and Claudin's disfigurement.
While the police, led by one Raoul Daubert (Edgar Barrier), attempt to find and apprehend Claudin, he secretly starts manipulating circumstances so that she can have her big break.  Although he has unrequited love for her, she herself is pursued by both Raoul and the Opera's male lead, Anatole Garron (Eddy).  When Claudin's obsession with Christine results in further deaths Raoul cooks up a plan to draw him out, while Anatole partners with Franz Liszt (Fritz Leiber) in his own attempt to capture the Phantom.  Meanwhile, Claudin himself decides to finally make his affections openly known to Christine.
One thing about the silent version is that it was truly difficult to convey opera without sound.  The opera in that movie, as in the book, was Faust, and without actually playing it there was no danger of running afoul of copyright in the U.S. or Europe.  The 1929 version had a vocal performance added in, but by 1943 a good portion of Western Europe was occupied by the Third Reich, while some of the legitimate governments existed only in exile, and copyrights were kind of up in the air.  It forced the production to largely make up their own opera performances based on classical pieces that were already in public domain at the time.  A lot of work went into creating these elaborate shows on the fly, and many of them are lavishly presented and well done.  Nelson Eddy, though nominally a popular music singer, had experience in the opera, as did Susanna Foster and other actors that performed.  The effort, if this was a movie about opera, would have been justified.
Unfortunately, the story itself is about a disfigured madman obsessing over a young opera singer.  The 1925 version followed the novel quite closely in many aspects, never giving Erik's deformity or disfigurement a reason.  It became a reason for the man, a talented musician and architect, to find a place in which to hide himself and gradually become insane in his isolation.  While Claude Rains, prior to Erique Claudin's disfigurement, is given significant screen time to develop back story, it is to the detriment of the Phantom itself.  It's a major change from both the novel and the original movie and, in fact, the story change could have been made without officially making this a Phantom movie.
Instead the film concentrates on two things: opera performances, and the comical romantic rivalry between Raoul and Anatole, which obviously is a holdover from when this was supposed to be an Abbott and Costello vehicle.  It definitely doesn't work and seems shoehorned in, where the little bit of what remains of the original story pops up here and there.  With most of the story altered or removed the film concentrates on filling in most of its running time with the performances.  It does take advantage of the Paris Opera set, which is the same one used in the original movie, but ultimately fails to garner any suspense.  What should be a suspenseful sequence - where Claudin causes a chandelier to crash into the crowd - is one of the centerpieces from the original film, and, while nicely filmed, is not a surprise.
While the acting is fine from all involved and the opera sequences well done it would have been better had this been either a straight remake of the original or if it had adhered more to the original novel - or, instead, forget about making Claudin the Phantom, change all the characters' names (Anatole is not in the novel and Raoul is completely different here) and make an entirely different film inspired in some way by Leroux's story but taking some real advantage of the three-way rivalry for Christine's affections rather than just presenting what is, ultimately, an unsatisfying and unnecessarily bloated revision of the tale.
The Phantom of the Opera (1943)
Time: 92 minutes
Starring: Nelson Eddy, Claude Rains, Susanna Foster, Edgar Barrier
Director: Arthur Lubin