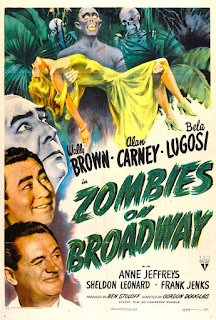 In the 1940s one of the biggest comedy duos was Bud Abbott and Lou Costello.  The two had success in radio early on, but soon hit their stride performing on stage and on film.  Toward the late 1940s they were famous for briefly breathing some new life into the old Universal monsters, particularly with Abbott and Costello Meet Frankenstein, but their first foray into supernatural comedy was 1941's Hold That Ghost.  Like a number of their films over the next decade it was a hit, and just the light-hearted fare the nation needed during wartime.
Whenever a successful formula pops up it is inevitable it will be copied, and a number of other studios tried.  There were the Ritz Brothers, who worked for both 20th Century Fox and MGM, and then there was Wally Brown and Alan Carney at RKO.  Where the Ritzes typically did their own thing (although compared somewhat to the Marx Brothers), Brown and Carney were fishing from the same well as Abbott and Costello.  They didn't last as long as their influence, and definitely are not as well remembered, but they did leave a few amusing films behind.
One of those is Zombies on Broadway, which featured the duo jumping on the zombie trend of the time.  Keep in mind these are not the zombies we are used to now, but instead human beings turned into the walking dead that do the bidding of their masters.  Often there were subplots about wild natives and Voodoo, as the zombie legends typically surfaced from Haiti and had some basis in reality of plantation owners using psychoactive compounds to make their workers more obedient.  In this case, though, the guys need a zombie for entertainment.
Ace Miller (Sheldon Leonard) is a gangster trying to go straight by opening the Zombie Hut, a new nightclub.  He has promised the presentation of a real life zombie.  While his publicity agents Jerry (Brown) and Mike (Carney) think they may get by with an actor, things get tense when radio personality Douglas Walker (Louis Jean Heydt), who has an ongoing feud with Ace, states that he will be making sure the zombie is real.
Tasked with finding a real one, or else, they visit a museum to get some information from the curator (Ian Wolfe), and find out that a man named Paul Renault (Bela Lugosi) is possibly living on the island of San Sebastian and still doing research into the subject.  Ace sends Mike and Jerry off to the island where they meet a singer named Jean (Anne Jeffreys) who is hoping they are her ticket out of San Sebastian, and is happy to help find them a zombie if it gets her out of there.  Renault, however, is more than happy to have the three of them over, as he has just perfected a serum for creating the living dead for himself.
Zombies on Broadway has a number of references to the classic horror film I Walked with a Zombie, including music by calypso artist Sir Lancelot and having the main zombie, Kalaga, played by Darby Jones, who also played a similar role in the previous film.  Lugosi, of course, had played a mad scientist in White Zombie over a decade before.  This was a point in Lugosi's career where he was taking almost any roll he could to make money, often with Poverty Row studios.  It's too bad he didn't do more comedy, since there is a bit with him trying to catch a monkey in a chest of drawers that is absolutely hilarious, since he knows how to play the whole thing straight without mugging.
Although this movie is really not that bad on the whole, it is pretty forgettable, just as Brown and Carney ultimately were.  The writing is not as snappy as even the lesser of the Abbott and Costello films, and the guys themselves are constantly upstaged by Jeffreys, Lugosi and a monkey.  In fact, when it turns out that a man known for playing vampires and mad doctors is better at the comedy than the comedians there is going to be a problem going forward.
Still, Zombies on Broadway is not as terrible as it could have been.  There are some amusing lines here and there, a couple light fright scenes and the musical numbers are kept short so they don't drag the action down.  It's RKO, so at least it's not a bottom-of-the-barrel studio like I feared it would be, but it's probably still better to watch Abbott and Costello if one is in the mood rather than their copy.
Zombies on Broadway (1945)
Time: 69 minutes
Starring: Wally Brown, Alan Carney, Anne Jeffreys, Bela Lugosi
Director: Gordon Douglas