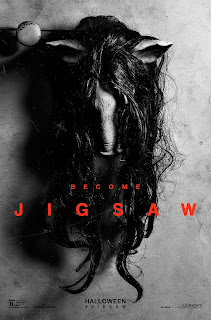 The Saw series by this time should be played out.  Honestly, the first three were good, the fourth merely okay, and after that there was a brief return in the sixth to what made the series good before it gave us an underwhelming finale.  Instead of the two-parter that was promised it was basically a repeat of the mistakes of the fifth movie with unexplained time jumps and what should have been shocking revelations devolving into pointless cameos.  Yes, Dr. Lawrence Gordon was back, was revealed as being one of Jigsaw's accomplices, but beyond that it looked as if Cary Elwes had popped in between engagements to earn a little side money.
So, by the time the events in Jigsaw happen, John Kramer as been dead for 11 years, no one knows what happened to (or even mentions) Mark Hoffmann and, because the killings stopped, Dr. Gordon is not even known to have had a role in the Jigsaw murders. The question then begins how to restart a series where it had fallen into a rut and killed off all of its main characters.
Well, luckily, the writers of the fourth through seventh movies were not brought back.  Instead Josh Stolberg and Pete Goldfinger, who were responsible for the script of Piranha 3D, were brought in to completely change things around.  Also, instead of using first-time directors or people who had worked in various capacities on the other film, this one was directed by Michael and Peter Spierig, who had been behind the strange vampire and science fiction mashup Daybreakers.  And, strangely for a reboot, everyone involved put together a standalone film, where it was a sequel but did not necessarily set up any future sequels itself.
When a small time crook named Edgar Munsen (Josiah Black) is shot by police after being seen holding what appears to be a detonator, mutilated bodies start turning up.  The first one, with most of its head gone, is found to have struggled with his captor, and the blood under the nails is something that shouldn't exist: the blood of John Kramer (Tobin Bell), the Jigsaw killer, who has been dead for over a decade.  As more bodies turn up coroner Logan Nelson (Matt Passmore) and Detective Halloran (Callum Keith Rennie) become concerned that they have a copycat killer on their hands.
Meanwhile, five people are being put through a test in which they are asked to confess their sins in order to survive.  Ryan (Paul Braunstein) seems unwilling to play the game due to his impatience and constantly puts the other captives in danger, with each person killed being dropped off for the police to find.  As the search escalates Halloran begins suspecting Nelson, especially since his assistant Eleanor Bonneville has a strange obsession with Kramer.  Nelson, however, thinks it is Halloran who is behind it, and with Eleanor's help hopes to prove to the police that the copycat killer is one of their own.
The police procedural parts of the Saw films have always been the weakest elements and, while it is better here, it is still not as interesting as what is going on with the game.  It's something that has unfortunately plagued the series since the fourth movie when critics started throwing the term "torture porn" around.  The makers of the Saw movies have been so desperate to prove their detractors wrong that they have gone through great lengths to make Kramer's traps secondary to the overarching story.  That story, like I have said before, easily could have ended with the third film, with the sixth being the reboot and Jigsaw being the follow-up.  The original run was attempting to churn these films out once a year, and the gap has done the series some good, as this feels like the same universe but doesn't come across as just being the same thing repeated.
I would have liked to have Eleanor involved in things more than as a red herring, and there is one situation where the time line simply doesn't make sense for how a body got from one place to an extremely unlikely place within less than 24 hours.  The other time discrepancies with body disposal are fully explained by the end, but in this one case they went for payoff rather than logic.  The traps are interesting and a lot less complicated, although the list of people that helped Kramer keeps growing to the point where it stretches believability.
The flaws are there, but Jigsaw is still a good film, and actually works better as a finale, or at least a coda, to the original series than Saw: The Final Chapter did.  No gimmicky 3D stuff this time around, either, and it is probably the last time Tobin Bell will appear in the part.  It's a good send-off for him and, if the series does continue in any fashion, allows for it to break free from his original convoluted moralizing.
Jigsaw (2017)
Time: 92 minutes
Starring: Matt Passmore, Callum Keith Rennie, Hannah Emily Anderson, Tobin Bell, Paul Braunstein, Brittany Allen
Directors: Michael Spierig, Peter Spierig