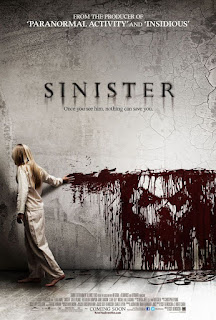 The Blair Witch Project helped introduce the world to found-footage horror films and an entire new genre took off.  All that was needed was a location, some handheld cameras and actors who were willing to do most of the work.  There was a general story, but a good portion was improvised.  Hours of footage could be recorded since this was largely done digitally and then edited down to what would eventually make the movie.  However, there had to have been someone, at some point, that actually found the footage.  Sinister introduces us to one unlucky soul who happens to do so.
Ellison Oswalt (Ethan Hawke) is a true crime writer whose reputation has been diminished since one of his books ended up messing up a case.  Facing bankruptcy and sensing that he has one more chance to turn his career around he moves his family into a house where a family was murdered and the daughter went missing.  He decides to keep this information from Tracy (Juliet Rylance) and his kids Trevor (Michael Hall D'Addario) and Ashley (Clare Foley), but the local sheriff (Fred Thompson) is not too pleased with his decision.
Upon moving in Ellison finds a box of 8mm film reels and a projector.  The reels contain footage of murders going back to 1966, all of which turn out to have similarities to the one that happened in the house, where one child was missing.  In one of the reels he sees a face and in most of them a symbol, which turns out to be for a Babylonian deity named Bughuul (Nicholas King) who was known to steal children and eat their souls.  With the help of a local deputy (James Ransone) Ellison begins to piece this all together and, as numerous things begin to happen to him and his family, he begins to realize moving into the house was a big mistake.
Sinister had an extremely low budget, so director and co-writer Scott Derickson kept things largely isolated to the home, with the exception of the 8mm snuff films.  Those were all filmed separately on Super 8.  Interestingly the house is in an almost constant state of darkness, with much of the action happening out of sight or just simply being sounds.  It works for a majority of the film, with Bughuul being a background figure that shows up here and there in pictures and footage, but rarely in person.  What do show up are a number of ghost children, and that is where things start to unravel a bit.
As the film winds toward its conclusion it gives up trying to be subtle and shows way too much and also begins to depend on jump scares rather than the tension it built up.    The biggest jump scare, which didn't even work as a scare, comes at the end, and it completely destroys the mood of the movie that just came before it.  That is hard to do because by that point the discomfort the early part of the film thrived on has returned and, right at the end, we get something from the early days of YouTube.
Helping to create the tension is a number of inspired music choices.  There is a regular, low-key score to the film, but it also used music by Boards of Canada, Ulver and others to set the mood, particularly with the viewing of some of the films and the final few minutes of the movie itself.  Ethan Hawke is good, not overacting the frustrated writer part but showing a believable descent into obsession, why Juliet Rylance comes across about how one would expect a wife put in this position would.  Unfortunately the kids are the usual mopey Hollywood types.
I still largely like the movie because, for the majority, it does what it intends to do and does it well.  It just doesn't seem to trust its audience at the end to stick with it unless the revelations in the last third are spoonfed and some creepy ghosts show up.  Too bad they had to go for that one last jump scare that was more comical than anything else.
Sinister (2012)
Time: 110 minutes
Starring: Ethan Hawke, Juliet Rylance, Michael Hall D'Addario, Clare Foley, Nicholas King
Director: Scott Derrickson