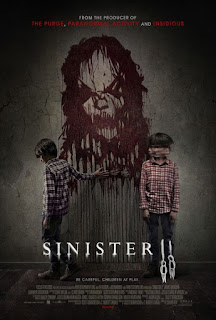 The first Sinister featured an interesting twist on found footage, following the person watching the footage instead of just sitting through it ourselves.  It was low budget, but the fact that everything took place within one dark house where a murder took place added to the tension.  Unfortunately, toward the end, it went from subtle scares to jump scares, with a number of the children that Bughuul had captured running about and the creature itself saying, "Hi there!" at the end.
Despite the fact that the last attempt at a scare was more stupid than frightening the rest of the movie was pretty good.  The music added to the tension and the way it revealed certain things while hiding others helped to leave a lot to the imagination.  It made enough so that Blumhouse thought there might be a sequel, so Scott Derrickson and C. Robert Cargill whipped one up, only this time with Ciarán Foy directing.
The Deputy (James Ransone) is no longer a deputy, but a private investigator, having been let go from his job after being cleared in the Oswalt murders.  What he largely investigates are similar killings, going around burning down the houses where they happened so new families cannot move in and start the cycle over.  As explained in the first movie, Bughuul (Nicholas King) and his child captives begin to seduce one of the kids while terrorizing the rest of the family, creating a situation in which they decide to move.  Afterward, the chosen kid murders them, films it and then is slowly consumed by Bughuul over a number of years.
One place the Deputy goes to is unfortunately occupied by Courtney (Shannyn Sossamon) and her kids Dylan (Robert Daniel Sloan) and Zach (Dartanian Sloan).  They are hiding out from her husband Clint (Lea Coco), an influential man with a bad temper and a history of abusing Courtney and the kids. Dylan is being targeted by Milo (Lucas Jade Zumann), the leader of a group of kids under Bughuul's control.  The Deputy figures out what is going on, but unfortunately her husband has also found her and is insistent that she and the kids leave and return to him.
While Bughuul is typically hands-off himself, this time around he uses his various methods of entering our dimension - not just film, but through music, radio broadcasts and art - to taunt and stalk the Deputy when he can, while his band of children try to drive the family apart and instigate them to move.  If Milo and the kids remind viewers of Children of the Corn, it was pretty much intended to do so, with further references to that movie as things go on.  While creepy, the events that happen in Sinister 2 seem a bit more stylized and unreal than the first film, particularly as the murders in the films (now 16mm) seem a bit too elaborate for kids.  Thus, the movie is nowhere near as scary or effective as the first.
Despite that it is welcome that there are not as many jump scares in this, although the ending shot is once again repeated and once again just seems silly.  The fresh take, of having much of this be from the children's point of view, helped as well.  Also, as much as it is nice to have James Ransone back, his character is nowhere near as interesting as Ethan Hawke's was in the previous film.
Unlike the Insidious series Blumhouse seems to have just decided to end Sinister with this one.  I remember this movie coming out with little fanfare and, sadly, the poster for it being up on a forgotten billboard months after its short theatrical run.  While the concept may be interesting it was probably a smart move because, other than finding some way of killing Bughuul, there was really nothing more to be done here.
Sinister 2 (2015)
Time: 97 minutes
Starring: James Ransone, Shannyn Sossaman, Robert Daniel Sloan, Dartanian Sloan, Lucas Jade Zumann, Nicholas King
Director: Ciarán Foy