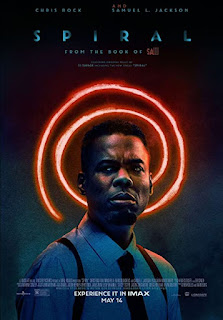 If there was one thing Jigsaw did it was bring the Saw series to a satisfying end.  At the same time it showed that it didn't have to keep following the same pattern movie after movie.  Honestly, I don't think there was ever any intention on carrying on further with the story, as we learn about John Kramer's first test run and yet another unknown assistant, Logan Nelson, who is originally one of his intended players until Kramer has second thoughts and decides what he is doing to Nelson is too much like vengeance.  The story is basically about Nelson bringing down a Detective Halloran, who had let the murderer of Nelson's wife go free, and framing him as a Jigsaw copycat.
The film works as Nelson has just one goal.  He achieves it and, as far as is known, continues his work in the city's coroner office with no one the wiser.  Neither he, nor any of the other participants except Kramer are mentioned in Spiral as a new Jigsaw copycat emerges, this time targeting the city's police force.  When Det. Marv Boswick (Dan Petronijevic), Boz to his best friend Det. Zeke Banks (Chris Rock), is killed in an elaborate trap set up in the subway, Banks and his new partner William Schenk (Max Minghella) begin investigating.
The problem is Banks, the son of former police chief Marcus Banks (Samuel L. Jackson), has been ostracized by most of the department for testifying against his former partner Peter Dunleavy (Patrick McManus), a corrupt cop responsible for the murder of at least two people.  It turns out that Dunleavy isn't the only one, as many of the other officers have records of brutality, murder or just simply looking the other way as it happened.  The new Jigsaw killer announces their intention to clean up the force.
The reason Spiral exists is because Chris Rock wanted to do a Saw film.  He came up with the concept, helped write it along with Peter Goldfinger and Josh Stolberg (who had written the previous film, Jigsaw) and brought back Darren Lynn Bousman, who had directed the second, third and fourth movies of the series.  Although it is a minor spoiler, what it doesn't do (and refreshingly so) is bring back Tobin Bell for another segment of unknown Jigsaw killings or add to the growing number of assistants.  Other than admiring Kramer's methods the new killer has no connection with the original Jigsaw, thus the reveal and the usual twists at the end aren't so convoluted this time around.
That does present a problem in that, since the twist itself doesn't require a whole lot of explanation, it is quite easy to figure out who the new killer is.  Instead of springing this as a major surprise the killer's motives are explored more than a big reveal.  One of the surprising things I did see this time around was Darren Lynn Bousman's improvement as a director.  No more of those grungy, overexposed filters he used in the early entries, but instead he uses a natural method of filming that makes this look more like a regular suspense film.  He has also learned to cut back on the quick cuts except where he necessarily had to use them this time to satisfy the MPAA.
There has been some criticism of Chris Rock as a dramatic actor and, in this case, it is somewhat warranted.  He can pull it off - his character in the most recent season of Fargo is a good example - but here he can't decide whether to be the loud Chris Rock of his comedy routines or to play it subtle.  Too often the loud overcomes the subtlety where the latter is needed, although he seems to work better in some early scenes with Samuel L. Jackson.  I think part of the problem is that Rock wanted to play the part like like a combination of Dirty Harry and Serpico, but he doesn't exactly succeed.
One thing that did surprise me was there is an entire scene where the detectives gather in a room, start looking at old case files and start trying to hash things out with research.  Rarely do we get a realistic scene like this in any movie with police, as they are usually just busting down doors and running in without backup.  Of course, this whole scene happens just prior to one of the cops going into an abandoned warehouse with no backup to predictable results.
While I liked Spiral a lot more than most people seem to, both the biggest asset and the biggest flaw is that it doesn't exactly feel like a Saw film.  It may be a lot different than the other movies in the series, but it is not that much of a deviation from other serial killer and suspense films.  They largely played themselves out in the 1990s because, after a while, they had to start blatantly copying the films that came before them.  Spiral isn't really guilty of ripping anything off, but it also doesn't do anything too out of the ordinary; it's kind of like a giallo movie replaced by intricate traps rather than a black-gloved killer.  It works, but we've been down this road many times before.
Spiral (2021)
Time: 93 minutes
Starring: Chris Rock, Max Minghella, Samuel L. Jackson
Director: Darren Lynn Bousman