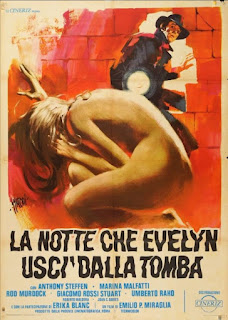 The Night Evelyn Came Out of the Grave is one of those movies I have been wanting to see for a long time.  I originally had it on a cheap horror box set but never watched it.  I did get about maybe a minute or two into it, but it was a poor pan-and-scan version.  From what little memory I have of it the beginning was completely different and, even at the time, I knew there were several versions of this.
All the versions that made it to the United States - including the theatrical one, which had a great poster that had little to do with the story - were butchered in some manner.  It went into public domain rather quickly which meant anyone could do what they wanted, and I am sure that many companies, including those leasing films for the grindhouse circuit, made versions that emphasized the nudity (of which there is plenty) or the violence (of which there is a little) or the horror element (of which there is next to none).  Releasing it under the direct English translation of the Italian title I guess was lurid enough to get some people in as well.
Lord Alan Cunningham (Anthony Steffen) is trying to recover after a mental breakdown caused by his wife Evelyn (Paola Natale) frolicking with her lover in the gardens of the ancestral castle.  Her unfaithfulness, along with her death in childbirth, put him over the edge.  Supposedly cured, he finds himself bringing back red-headed prostitutes and strippers that look like Evelyn to play sadomasochistic games with - ones that often go too far.
While initially rejecting the advice of his doctor Richard Timberlane (Giacomo Rossi Stuart) to remarry, he changes his mind after attending a party with his cousin George (Enzo Tarascio), where he meets a woman named Gladys (Marina Malfatti).  He falls in love with her and marries her almost immediately.  That is when a whole round of deaths begin - his former brother-in-law Albert (Roberto Maldera) and his Aunt Agatha (Joan C. Davis) primary among them.  Mounting evidence is that Evelyn has returned from the dead and is seeking revenge.
Despite the name of the movie and the American poster art, and a few nods to spiritualism and gothic horror, this is largely a giallo disguised as a scare movie.  Emilio Miraglia had worked with other directors, including Lucio Fulci, and was definitely familiar with the genre.  It is awhile before we get a black-gloved killer (initially it's yellow gloves for a change).  He also wrote the screenplay for the film and it tries hard to stay on point.  Unfortunately, a lot of problems that pop up in the genre arise, particularly twists and incidents that require the power of teleportation from those involved.  There is also the fact that our supposed hero, no matter what others around him are up to, has murdered and disposed of the body of at least one woman and bribed his brother-in-law to look the other way.
That really doesn't leave anyone to root for.  There are all sorts of reveals and double crosses before the film comes to its abrupt, unsatisfying end, which is equally frustrating since there are a lot of elements that work.  They simply don't come together in a coherent way.  Also, I really hoped at some point there would be an actual Evelyn coming out of an actual grave; it would have been nice for that to be the ultimate twist with everyone, including Alan, getting his due, but alas it never happens.
The actors do the usual workman-like job one would expect from a second-tier Italian release.  At least one of the kills works, but most are bloodless, and one is probably more well-known due to the amount of nudity involved.  Miraglia, to his credit, knows how to shoot a film even if he may not be the best at writing one, and even shows some of the usual heavy use of basic colors many of these films have.  Still, this feels like an attempt to hop on board a trend and get a movie done quickly - especially when Miraglia's less-exploitative The Red Queen Kills Seven Times is more honestly a giallo and considered a much better film.
The Night Evelyn Came Out of the Grave (1972)
Time: 103 minutes
Starring: Anthony Steffen, Marina Malfatti, Enzo Tarascio, Giacomo Rossi Stuart
Director: Emilio Miraglia