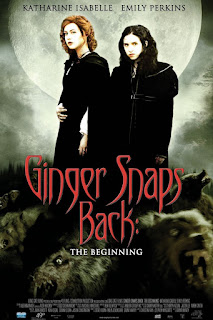 The first two Ginger Snaps films dealt with oncoming adolescence, adulthood, stalking and addiction.  In the second we followed what happened to Brigitte (Emily Perkins) after she injected her sister's blood, resorting to injecting monkshood to try and keep the change from happening.  In the end, despite being set up as the victim of a male werewolf's carnal desires or resorting to performing various acts to get her needed drug from an orderly in a rehab, Brigitte came to have an even worse fate.  An outcast girl she befriended, Ghost (Tatiana Maslany), turned out to be a budding serial killer and intended to use Brigitte in her final form as her personal hellhound to help her terrorize her enemies.
It's not exactly what one figured would be the end of the story, especially since a third movie was filmed at the same time as the second.  Unfortunately, after all this time, we are probably never going to find out what happened with Ghost and Brigitte, and since changing to a werewolf in the Ginger Snaps universe is permanent, there probably wasn't much further to go.  So, instead, we go back to 1815, where two similar sisters, named Ginger (Katharine Isabelle) and Brigitte, find themselves confronting a similar crisis to what their descendants would experience 185 years later.
While we don't know exactly what happened to their parents, the Fitzgerald sisters are making their way through the Canadian west when they come across an abandoned native village where they meet a seer (Edna Rain) who tells them they must kill a boy or one sister must kill the other.  They leave the village more confused than ever.  When Brigitte is rescued from a bear trap by a native hunter (Nathaniel Arcand) they are led back to a fort that is under siege by werewolves.
The inhabitants, led by Wallace Rowlands (Tom McCamus), are desperately waiting for supplies that are late in coming, and their numbers continue to dwindle with each attack.  A good portion are ready to leave and find a way back east, while Reverend Gilbert (Hugh Dillon) believes that they are all suffering due to their sins and that only by making sacrifices will they survive.  The sisters are viewed with suspicion and hostility from the beginning and, once Ginger is bitten, Brigitte tries to work with the hunter find out how to save her, as the native legends say the land will be forever cursed if she does not follow her destiny.
This is a nice way of setting up how werewolves appeared in Canada, as the hunter explains that some unnamed European lycanthrope brought the disease, which they equate to their legends of the Wendigo.  In this case, rather than becoming wild cannibals, they become wolf-like creatures that, although occasionally having some marks on them that show they were once human, have only animal instinct left.  Though this was made the same time as the second film it utilized a different director, Grant Harvey, and once again different writers, this time Christina Ray and Stephen Massicotte.  It was definitely brave to do what can be looked at as standalone film, as nothing in the first two films, other than the parameters of what the werewolves are, carries over.
The problem is that there is a lot more promise in the story than what is delivered.  Isabelle and Perkins know their parts well, and some other actors cross over from film to film.  The acting largely is good, although sometimes the dialogue seems a bit too modern, and other times it seems to be reaching to sound old-fashioned.  There is some campy overacting from Dillon which really livens things up, but there is also an over-reliance on the "Native Americans are magic" trope.  This makes it quite an unbalanced film and, unfortunately, Harvey can't make up for it with visuals; this calls for someone with a flair for strange camera angles, lighting and movement to overcome some of the weaker parts, and that unfortunately is just not there.
What is here is KNB's great werewolf effects and makeup which tend to make this look like a much more expensive movie than it is.  The ending is quite exciting but, again, would have been even better with a director who was a little more creative.  Once again there is a bit of a twist and, while not as disturbing as the end of the second, it helps to set up what are in this case future events.
While I know that a number of people consider this the best in the series, I'm going to have to say that while it could have been the best, it ends up being the weakest.  It may have had a theatrical release in Canada, but in the United States it came out directly on DVD, and that is understandable because, while the first two have a cinematic feel, this has much to it that reminded me of direct-to-video sequels from the 1990s - especially those that went into the past or space when the original creative juices ran out.  In this case, creatively there is something still there, but the execution just doesn't do it justice.
Ginger Snaps Back: The Beginning (2004)
Time: 94 minutes
Starring: Katharine Isabelle, Emily Perkins, Nathaniel Arcand, Tom McCamos, Hugh Dillon
Director: Grant Harvey