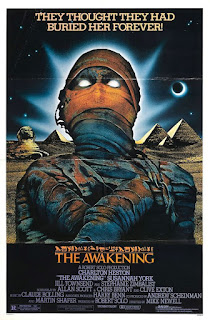 When I first saw the description of this I was sure I was going to see a movie where Charlton Heston fought a mummy.  That still is a lost opportunity, as it would have been entertaining to see a mummy come to life, take one look at him and say, "Moses?"
Unfortunately, we don't get a mummy trying to get his damn dirty hands on Mr. Heston.  Instead what we get is an adaptation of Bram Stoker's novel Jewel of the Seven Stars, which had only been adapted 9 years before in the Hammer film Blood from the Mummy's Tomb.  We have Charlton Heston in his first and, as far as I know, only horror film alongside a young Stephanie Zimbalist and a lot of gorgeous on-location filming in Egypt.  Unfortunately what we also get is Stoker's novel translated into a dull attempt to cash in on The Omen.
Matthew Corbeck (Heston) is an archaeologist looking for the tomb of a legendary nameless queen.  Following the directions of a 19th century Dutch explorer named Van Horn, he has brought along his pregnant wife Anne (Jill Townsend) and his young assistant Jane (Susannah York).  Anne is upset about both her husband's obsession with finding the tomb and the fact that he spends much of his time with Jane, although nothing romantic is happening between them - at least at the time.  They do, however, find the tomb, and Anne goes into labor - two months early - as soon as it is opened.
18 years later his daughter Margaret (Zimbalist) is approaching her birthday, and strange things begin to happen.  The vacuum seal on the queen's exhibit in the Cairo museum breaks, leading Corbeck to insist that the body be brought back to London for proper care.  Jane's translations state that when a jewel of seven stars is found and the queen's canopic jars are brought to her after a certain number of eclipses she will reincarnate.  Soon the prophecies appear to be coming true, and as they do the friends of Margaret and Matthew begin to die violently.
Director Mike Newell had made some feature films before this, but was largely known for television work.  That would continue for awhile, although he would get a number of hit films under his belt, such as Four Weddings and a Funeral, Donnie Brasco and Harry Potter and the Goblet of Fire.  This early in his career, being able to work with Charlton Heston and film on location in Egypt must have seemed like a dream, and at least he makes the best of his time at Luxor, Cairo and other locations.  Heston also does the best with what he is given, which is largely a role that is equal parts Max von Sydow from The Exorcist and Gregory Peck from The Omen.
The majority of the movie meanders, and it is hard to tell if that is the fault of the writers or the director.  There are strange happenings and too many characters who get killed off way too quickly to care about them.  It really needed tighter focus on the story in some places, but it often needed more story to focus on.  What is a promising start quickly turns into half-baked scares with a little blood thrown in here and there.
Honestly, that is the best way of describing The Awakening.  It is a competent, but boring, and late attempt to hop on the apocalyptic horror trend of the late 1970s.  At least the Hammer version had its usual heaving bosoms and technicolor blood to keep things interesting, but this anemic film doesn't even have that.  In the end even the title is ironic, since staying awake through this movie proves quite the challenge.
The Awakening (1980)
Time: 101 minutes
Starring: Charlton Heston, Stephanie Zimbalist, Susannah York
Director: Mike Newell