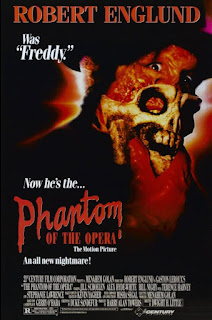 It always disappoints me when a studio gets cold feet.  Menahem Golan, parting ways from his partners at Cannon, formed 21st Century Film Productions.  Instead of going for something cheap he decided to get one of the biggest contemporary horror stars - Robert Englund - to play one of the most popular horror roles of the past.  Instead of going the cheap Full Moon route he hired Dwight H. Little, who had directed the surprisingly well-done Halloween 4: The Return of Michael Meyers, and filmed on a set of 19th century London that Hammer would have been proud of.  Despite the fact that most of us who remember when this film came out probably think it was a direct-to-video release, quite a bit of money was invested to make this a stylish crossover of old-time horror films and late '80s slashers.
Unfortunately they just couldn't resist trying to connect this new version of The Phantom of the Opera with A Nightmare on Elm Street, right down to using what looks like Freddy makeup on the poster and making a reference to the series in the tagline.  The movie failed miserably, with critics who wanted another Phantom movie (and who already hated slasher films) giving it horrible ratings and slasher fans not being happy that the majority of the movie that didn't involve gruesome killings.  Despite that, this version was the closest adaptation of Gaston Leroux's book since the original 1925 The Phantom of the Opera.
In the late 1980s singer Christina Day (Jill Schoelen) and her friend Meg (Molly Shannon) are searching the library for a unique piece of music for Christina to perform during an audition.  They come across an unfinished opera called Don Juan Triumphant, written by a composer named Erik Destler.  The only information they are able to find on him was that he was accused of a number of murders and the disappearance of a young opera singer in 19th century London.
When Christina auditions using the piece she is knocked out by a sandbag and wakes up as a singer of the same name that is part of a London opera theater, also with a friend named Meg (Emma Rawson).  The theater is presenting Faust and has had a number of mishaps attributed to the theater's ghost.  That phantom is, of course, Destler, and he is focused on making sure that Christina gets her chance to perform - and that means making sure nothing is standing in her, or his, way, including her boyfriend Richard (Alex Hyde-White), who is co-owner of the theater.  Eventually the inevitable stand-off between Destler, Christina and Richard comes about, but Destler may not be ready to face the music just yet.
Gerry O'Hara, who wrote the majority of the script, largely did so as an homage to the original movie.  Faust is once again the opera being performed, with Don Juan Triumphant now coming to life, much as it does in Andrew Lloyd Webber's musical version that debuted a year before this film.  Christine's last name has been changed from Daaé to Day, and even in the past she is an American singer living in London, meaning Jill Schoelen didn't have to try to do a British accent.  Robert Englund himself doesn't try an accent either, so the accents are wisely left to the English actors, which includes a young-ish Bill Nighy as one of the owners of the theater.
The London location is definitely inspired by Hammer's 1962 version but, the biggest surprise, was a holdover from Phantom of the Paradise, a 1974 Brian De Palma take on the story, only with the Phantom being a jilted singer/songwriter getting revenge on a record label owner.  In De Palma's story we not only get the first reference to Faust since the 1925 version but we also get a parallel story, which we get here as well, with some similar inspiration on the villain's Achilles heel.  And, make no bones about it, where Herbert Lom's portrayal was as an anti-hero, Englund's Erik Destler is a nasty piece of work, using human skin he has "acquired" from victims to give himself as lifelike a mask as possible.
For something that spent decades gathering dust on video store shelves the performances are actually quite good, with Schoelen playing Christine in naïve fashion and with a costume design that recalls that of Mary Philbin in the original.  There is even a masked ball scene where Destler shows up as the Red Death in a rather well-done costume - although it is nowhere near as elaborate or wonderful as Lon Chaney's.  In case one might only be familiar with Englund from the Nightmare movies and possibly V, the truth is the guy can act and, except for a couple quips (one rather good), the movie steers completely away from anything Krueger-related.  The makeup work on Englund is well done, as are the various kills, which somehow manage not to clash with the older-style horror story that frames them.
Sometimes budget constraints show through, and unfortunately there is no chandelier scene, but the 1989 version of Phantom of the Opera is an unfairly maligned film that I hope will some day be re-evaluated.  Such high hopes were placed on the film that a sequel, also starring Englund and this time with the Phantom haunting the sewers of Manhattan, was planned, but never realized.  As for this film, it is on equal footing with Hammer's version, and it is refreshing to see callbacks to Lon Chaney's original, even if the story still heavily deviates from what Leroux originally intended.
Phantom of the Opera (1989)
Time: 93 minutes
Starring: Robert Englund, Jill Schoelen, Alex Hyde-White
Director: Dwight H. Little