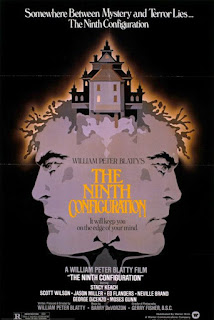 William Peter Blatty wrote The Ninth Configuration both to rewrite his previous novel, Twinkle, Twinkle, "Killer" Kane! into something he was satisfied with and as a sequel to his novel The Exorcist.  It's a bit strange as this has nothing to do with demonic possession or even anything traditionally horror-related unlike his third book in the series, Legion.  Instead he meant it to be an exploration of the nature of goodness in the world which, I would have to admit, is a bit harder to explore than the nature of evil. After all, we are supposed to be good by default, and only evil by choice.  There have been some stories and novels that explore whether the opposite is true, but this is not one; it is largely exploring the potentiality for good to exist even within someone that would be considered evil by most.
The way in which The Ninth Configuration relates with The Exorcist (the book, not the movie) is that Capt. Billy Cutshaw is the astronaut that Regan informs is going to die.  That's really the only thread that connects them in the same universe, unlike Legion, which brings back a possessed Father Karras.  Cutshaw is kind of an odd man out at an insane asylum that is actually the last of a number of experimental hospitals set up for soldiers facing "combat fatigue" during the Vietnam War, and the events take place as the war itself is winding down.
Cutshaw (Scott Wilson) is an astronaut who, right before a moonshot, aborted takeoff and refused to go.  His behavior prior and after the mission were reminiscent of PTSD, so he was sent to a hospital located in a castle in the Pacific Northwest that a European noble had brought over piece by piece in the the 19th century.  The rest of the inmates are soldiers, including Lt. Frankie Reno (Jason Miller), who is trying to figure out how to do Shakespeare with dogs for actors, and others that have their similar quirks, creative or otherwise.  Maj. Marvin Groper (Neville Brand), one of the regular soldiers tasked with guarding them, thinks that most of them are faking.
Colonel Fell (Ed Flanders) is the doctor in charge until the arrival of Col. Vincent Kane (Stacy Keach), a new head psychiatrist with some radical views on how to treat the patients.  Rather than disciplining or drugging them, except in extreme circumstances, he instead indulges them in their fantasies in order to help bring about a cure.  The most difficult, though, is Cutshaw, who in addition to whatever caused him to abort the mission is also suffering a crisis of faith, both in God and humanity.  Kane begins to work with Cutshaw to help him once again see the good in others, but Kane has a past of his own.
This was kind of marketed as a horror film, largely due to its ties to The Exorcist, despite the fact that the horror is more of what lurks behind what we try to present to the world.  There are some gothic trappings with the castle and the dreary, rain soaked landscape, but this is really more like Blatty writing and making his own version of Catch 22.  There is a lot of dark, off-kilter humor, followed by shocking scenes of bloody violence toward the end.  And, like The Exorcist, it turns out to be a redemption story.  There is a slight supernatural element to it, but the human condition is at the center of everything.
The Ninth Configuration does suffer from some of the same problems as other movies Blatty has adapted from his own work.  He seams loathe to throw out a lot of what he has written, and sometimes does not seem to realize that some things work better in a written medium than in a filmed medium.  To this day I still like William Friedkin's original theatrical cut of The Exorcist more than I like Blatty's, even though I love his novel equally.  Friedkin made the right decisions for what would scare people in the theater, while Blatty in the book added character development to make the world feel as realistic as possible.  I guess if anyone could translate The Ninth Configuration from novel to film it was Blatty, and for the most part he is successful.  He is also a good director himself, with the fight scene in the bar being both shocking and well-filmed, and the castle and surroundings themselves providing much of the visual atmosphere.  The problem is that a narrative structure that works well in a book, where philosophical ideas can be discussed and explored fully, doesn't always work on film.  Stacy Keach and Scott Wilson are excellent in their roles, but Blatty is intent on having them discuss things while the rest of the movie is largely character studies of the other inmates.
There are a number of different versions of this available, but the one true version that Blatty put together is now the one most readily available on DVD and streaming.  While it is true that it could be adjusted in some ways to be more of a psychological horror film or comedy, and that Blatty's original cut is kind of a mess, it is a mess that is worth seeing because it all gets tied up in the end, with an interesting coda.  It's no surprise this didn't do well in the theaters, but it doesn't seem like a movie that was meant to have wide appeal in the first place, and Blatty certainly didn't try to compromise in that direction.  And, while without the thin connection with the movie version of The Exorcist, it does prepare one for Blatty's worldview going into his own film version of Legion, the true direct sequel to the original Excorcist movie.
The Ninth Configuration (1980)
Time: 118 minutes
Starring: Stacy Keach, Scott Wilson, Ed Flanders, Jason Miller
Director: William Peter Blatty