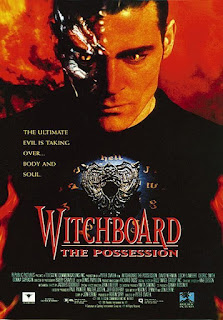 Kevin S. Tenney wrote and directed the first two Witchboard movies based on research that he had done on Ouija boards and possession.  Although they had their flaws both of them were interesting horror films, quite different than a lot of the slasher films that were all the rage at the time.  However, Tenney committed a mortal sin with Witchboard 2 - at least in the eyes of the slimy old Weinstein-style producers that were funding his film.
To get more money for the sequel he made a deal with Republic Pictures, and they thought that what Witchboard 2 needed was a little nudity to help get people into the theater.  However, Ami Dolenz, the star, had a no-nudity clause in her contract.  Tenney was pressured to try to coerce Dolenz into getting her kit off and, thinking it morally wrong, refused.  This resulted in little to no promotion of Witchboard 2 as well as the third installment being taken away from him.  All he gets on this one is a writer's credit.
Personally, I would not even want that, even if the only writing I did was the concept of a Ouija board that allows spirits to come through and possess the users.  Where the other two were low budget everything in Witchboard III screams cheap, and there is a big difference.  Low budget means one does what one can with what they have, while cheap just means someone with no understanding of what makes something good just churns out garbage.  This was obviously a direct-to-video item at the time, and it is as if no one associated with it had ever seen the other two films - or, for that matter, a decent horror film in the past.
Brian (David Nerman) has recently been fired from his job as a stockbroker, forcing his wife Julie (Elizabeth Lambert) and him to move into an apartment.  The building is owned by a man named Frances Redmond (Cedric Smith) who takes a liking to Brian and shows him his collection of occult artifacts - including a Ouija board that is adept at playing the commodities market.
While Brian ignores the board's advice at first he decides to take a chance, borrowing $50,000 from a shady investment mogul.  When the investment doesn't initially pan out Brian is about to face the consequences when a bit of blood wakes the board up.  Initially seeming to protect him, it soon takes the spirit from his body and replaces it with that of Frances - who, actually, was not Frances at all, but a demon that is looking to make a baby with Julie.
Digital effects were the new toy at the time and everyone tried them - even studios that shouldn't.  While the actual demon looks boring rather than absolutely terrible, the rest of the digital effects are the level of the Scorpion King from The Mummy Returns.  While normally a bargain-basement movie like his can be forgiven for it more than a big-budget picture, similar practical effects were done nearly a decade before in From Beyond, and I would hazard that Stuart Gordon didn't have much more money to work with than these guys did.  As for wanting to up the sex appeal, the problem is that it often comes across as creepy, especially since one extended topless scene involves possessed Brian trying to rape Elizabeth's friend Lisa (Donna Sarrasin).
While the acting in the other two Witchboard films was nothing to write home about, this is almost on the level of softcore porn.  In fact, at the beginning, I was wondering if they had just taken the Witchboard brand and used the basic premise to string a bunch of sex scenes together, as that was the level of the production values.  There is one good scene - where the loan shark gets killed - and I have my suspicions that might have been a leftover of Tenney's writing..  As for the rest Republic Pictures endeavored to take his property and make it theirs and managed to kill it off in the process.
Witchboard III: The Possession (1995)
Time: 93 minutes
Starring: David Nerman, Elizabeth Lambert, Cedric Smith, Donna Sarrasin
Director: Peter Svatek