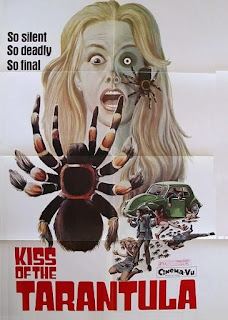 When digging into the depths of '70s trash cinema I never know what I'm going to discover.  I just know that often, among the lurid titles and barely legal poster art what I'm often going to find are 90-minute films that spend a good portion of the running time walking or driving from place to place.  When these movies are good, and have something shocking or strange to offer, they are truly good in their own twisted way.  Unfortunately quite a number are incompetent and make Paint Drying seem like epic filmmaking.
Thus was my fear going into Kiss of the Tarantula.  Other than an episode of The Life and Times of Grizzly Adams one of Munger's few other director credits is the blaxploitation film Black Starlet.  While that movie does seem to have its share of fans, Kiss of the Tarantula doesn't.  It's written off as a boring clone of Carrie.   While it is not the most exciting movie in the world, the truth is this was in production and probably finished before Carrie hit the theaters, although I'm sure the success of Brian De Palma's film convinced the makers of this that they could make a few bucks dropping it into the drive-ins.
Susan Bradley (Suzanna Ling) lives in a dilapidated mortuary with her father John (Herman Wallner), the town undertaker.  Early on she develops a fascination with spiders - something her mother Martha (Beverly Eddins) detests.  Her mother also detests living in the mortuary and plans to run off with John's brother Walter (Ernesto Macias), one of the town's police officers, after killing John.  When Susan hears what they are planning she uses a tarantula to scare her mother to death.
Years later, as a teenager, her obsession has increased, and she is an outcast with the other teenagers.  One day some of the local boys break in and kill one of her spiders, leading her to take some drastic measures.  She also finds that she needs to do the same with her uncle Walter who, being denied her mother all those years ago, has set his sites on Susan.
There are some plot and pacing problems.  Supposedly Susan has a boyfriend named Joe (Mark Smith), but he shows up and is gone, barely serving any purpose.  It's pretty much a good thing because Smith can barely read his lines.  In fact, the acting in this is all over the place, with Suzanna Ling and Ernesto Macias doing decent work while another semi-main character, Nancy Drury, features an awful, nails-on-chalkboard-like performance from Patricia Landon.
The surprising thing, however, is this is not any worse than more well-known second tier horror films in the '70s and '80s.  The acting is usually all over the place in those as well, and despite Munger not having a lot of actual credits to his name he is a competent director.  The movie does have some decent kill scenes, even if it is largely just the tarantulas hanging around wondering why the giant things keep screaming all the time.  With a couple exceptions it is people's overreaction to the spiders which puts them in danger more than the spiders themselves, which by now almost everyone knows are generally harmless.
Kiss of the Tarantula may not be a great film by any standard, but it doesn't overstay its welcome and what's on the screen, whether it creeps the viewers out or causes them to laugh hysterically, is entertaining.
Kiss of the Tarantula (1976)
Time: 85 minutes
Starring: Suzanna Ling, Ernesto Macias, Herman Wallner
Director: Chris Munger