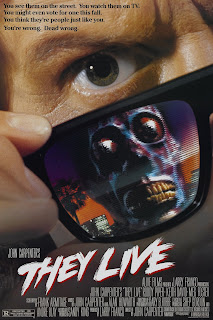 One of the memories of being a teenager is getting my mother to take me to see this movie.  The idea of aliens living among us and controlling us, especially to someone who read 1984 out of general interest when they were in elementary school, was more than intriguing.  I was also starting to learn a bit about which film directors I really liked.

Surprisingly, she liked it, except for the end (no matter how old you are, watching sleazy hotel sex with your mom is not an enticing thought).  It was a movie that stuck with me through the years, and obviously I wasn't the only one.  It's inspired street art and even a clothing line (the irony of which the founder and artist I'm quite sure is aware).

I've seen it a few times since and, happily, it holds up wonderfully and is an experience I look forward to each time - despite the fact that I'll never see an audience reaction like I did when I saw it in '88, when during the fight scene someone yelled, "Round three!"

John Nada (Roddy Piper) arrives in a near-future Los Angeles with heavy unemployment and shanty towns.  He finds work on a construction site and one of the homeless communities in which to stay due to a quick friendship with Frank (Keith David).  He seems to be getting into a good situation for once, but this is shattered by strange broadcasts on television which cause viewers to have headaches, and even stranger goings on at a nearby church.

Nada investigates and finds that the choir he hears singing on a regular basis is a tape recording.  The church is instead filled with lab equipment and boxes of sunglasses.  Worse yet, it seems to have attracted the attention of authorities, who stage a late-night raid and bulldoze the shanty town.  The next day, out of a job and hoping to sell some of the sunglasses, Nada retrieves a box he hid in a wall and heads downtown.  He stashes the box in a dumpster and keeps a pair for himself.

Donning the sunglasses, he exits the alley and finds the world is much different.  The world is in black and white, with signs that say "Obey" and "Consume" everywhere.  Loudspeakers from streetlamps and traffic lights constantly say, "Sleep," while probes watch over the populace.  Even more alarming, however, is that not everyone is human.

Curious, he enters a grocery store to see if he can find more of the aliens, and discovers they are the ones who seem to be members of the upper class.  After one of them reports that he can see, he flees and is pursued by the cops, both of whom are aliens.  He overcomes them and kills them, stealing the shotgun from the police car and heading into a local bank to kill anyone who is not human.  One alien, though, reports his description and then disappears.

Now a wanted man, Nada flees and takes cable executive Holly (Meg Foster) hostage in order to get away.  He finds temporary refuge at her house, but she manages to overcome him and call the authorities as well.  His only hope now is to convince others, starting with Frank.  Frank is understandably reluctant, but after a bit of persuasion comes around to putting on the glasses and seeing the world as it really is.

Frank and Nada soon hook up with the revolutionaries, who have designed contacts so that the sunglasses are no longer necessary.  Holly appears to have come around and joined as well, but before long the meeting is raided by the police and almost everyone is killed - but not before Nada gets wind that the transmitter that keeps everyone asleep is on the main dish of the cable company that Holly works for.  With the aid of a watch captured from one of the aliens, Frank and Nada infiltrate the tunnels below Los Angeles, learning the truth about what has happened to the world and racing against time to wake up humanity so that they can fight back.

This doesn't get immediately into the action like so many John Carpenter films do, but instead slowly leads up to its revelations so that the viewer can pretty much keep up to speed.  Although he appeared in other movie roles, this is the one Piper is best-known for, and he fits it perfectly.  The entire reveal of what the aliens have done is handled well, and the fight scene between Piper and David is one of the best in movie history.

Only things I have wrong is that Meg Foster's character, for the pivotal role she plays, should have been developed a bit more.  Also, this is not Carpenter's best musical score.  The blues guitar theme that accompanies Nada occasionally gets a bit repetitive and boring whenever there's not much going on.  It's a great introductory theme, but it's revisited too many times.

Those are minor quibbles with a movie that has had such an effect on society, although supposedly it was a flop at the box office.  Which, I guess, is par for the course with most of John Carpenter's output in the 1980s.