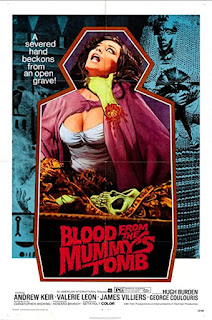 Bram Stoker is most known for his novel Dracula, but he had a career as a popular novelist that stretched close to 40 years.  He wrote in numerous genres, from romance to mystery, but his stories of the macabre are the ones he is most known for.  Besides Dracula, there is also his unfinished The Lair of the White Worm, which was adapted into a film in 1988 by Ken Russell, and Jewel of the Seven Stars.
The latter ended up spawning two films within a decade, Blood from the Mummy's Tomb and The Awakening.  Other versions pop up every now and then, while plot elements have shown up here and there in a number of mummy films.  The early 20th century saw ancient Egypt gain massive popularity with the public as new discoveries were made almost constantly.  Many popular novelists jumped on the bandwagon, and Stoker was a major name.  It is strange that the story took almost 70 years go make the jump to a movie.
Margaret Fuchs (Valerie Leon) is nearing her 18th birthday when her father (Andrew Kier) gives her a special gift: a ring with a ruby that, within, appears to show facets that make up the pattern of the main stars of Ursa Major.  Her boyfriend Tod (Mark Edwards) becomes curious because it is the first artifact he has seen of from her dad's expedition to Egypt to find the tomb of a nameless queen.  He takes the ring to his friend Dandridge (Hugh Burden) who, upon seeing it as well as seeing Margaret, has a fit and passes out.
Margaret happens to be the spitting image of the queen, named Tera, who was buried alive with her right hand severed.  The body appears perfectly preserved, with blood still flowing from her wrist, and Margaret was born at the same time the tomb was opened.  Unknowingly the other members of the expedition were tasked with guarding her burial relics which, when brought together at a certain time, would allow her soul to reinhabit her body.
Hammer was past its golden days when this came out and tried to make up for it by increasing both the sex and the violence in its movies, taking advantage of the loosening of censorship rules in both the U.S. and the UK.  That said the furthest Valerie Leon was going was the nude shot from the back, and partially in silhouette.  Otherwise, the movie itself is known as much for her cleavage as it is for the story.
I have not read Bram Stoker's novel and, having read Dracula, I'm sure this dwelt on and exaggerated many of the prurient facets of the book.  And, honestly, I think that's a good thing, as the movie works as an entertaining "B" picture.  It doesn't give us corpses lurching around in bandages, but rather an beautiful, but evil, woman with designs upon the world.  It also does much more to make the story entertaining that the more straight-laced version with Charlton Heston, The Awakening, that came out 9 years later.
The film still has some problems.  Hammer may have upped the blood and breasts as time went along, but the productions got cheaper and the directing still looked right out of the 1960s.  It also didn't help that the film had a number of problems getting made, with director Seth Holt passing away toward the end of the production and Hammer veteran Michael Carreras taking over, particularly for the scenes in the asylum.  In several cases it also feels like a number of auxiliary characters die for no reason other than writer Christopher Wicking, who adapted the novel for the screen, didn't know what to do with them or Holt or Carreras decided to ignore the script and just start knocking off anyone they considered extraneous.  The deaths involving the collecting of the artifacts are done quite well, however.  While this didn't do much to stop Hammer's slow slide into oblivion in the early 1970s it still leaves us with a fun movie and one of the better adaptations of the story.
Blood from the Mummy's Tomb (1971)
Time: 94 minutes
Starring: Valerie Leon, Andrew Kier, James Villiers, Mark Edwards
Directors: Seth Holt, Michael Carreras