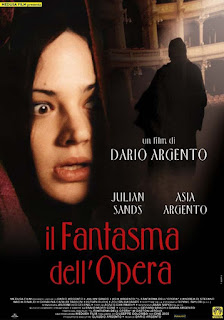 I think it may be safe to say that Dario Argento is the Queensrÿche of horror directors.  There are many famous directors that, at some point, the quality just vanished.  John Carpenter comes to mind, but there was a glaring reason why his movies after In the Mouth of Madness were not as good: he got tired and wanted to quit, only he seems to have needed the paycheck that stuff like Vampires and Ghosts of Mars promised so he could go off and spend the latter part of his life enjoying making music.  Dario Argento, on the other hand, just seems to suddenly hit a wall, much like Queensrÿche, who were one of the biggest metal bands in the 1990s and almost managed to survive where grunge had killed the others off.
With Argento, ignoring his segment for Two Evil Eyes, he had released one of his best movies, Opera, in 1987.  He followed that up with Trauma in 1993 which, though not as good, still had all the elements that made him popular.  The Stendhal Syndrome is different but still respectable, but then suddenly there is The Phantom of the Opera.  Although they don't line up exactly, it's like Empire, Promised Land, Hear in the Now Frontier and, suddenly, Q2K.  The small dip in quality between one project to another does not prepare fans for the sudden train wreck that happens.
Young singer Christine Daaé (Asia Argento) dreams of becoming a major opera star, and one night a strange man (Julian Sands) hears her singing.  He becomes obsessed and begins to communicate with her telepathically, telling her he will make her a star.  Meanwhile her affections are divided between him and another suitor, Vicomte Raoul de Chagny (Andrea Di Stefano).
At first Christine chooses her mystery man, who lives in a chamber under the opera house by an underground lake where he was raised, from childhood, by rats.  This upbringing somehow gave him supernatural powers.  He has been there before the opera was built, murdering anyone who came near.  Christine is the first human he has felt a connection with, but she soon figures out that her benefactor is a bit on the murderous and controlling side and decides to appeal to Raoul for help.  Still, her pull toward her darker side may be too great.
Asia Argento is terrible in this and, though I do like seeing her in the all-together, I can never get over the fact that it is her dad filming her.  If I had a daughter I would never even think of filming her naked in bed with anyone, even if it was Julian Sands, who I am sure made many women and men's jaws drop back in the 1990s.  This weird obsession Argento has with showing his daughter naked as much as possible I guess gets excused simply because he's Italian and not American.  I've never understood this idea that if someone is European we're supposed to suddenly understand the creepy undertones of their relationships.
Speaking of gratuitous nudity, there is an entire Turkish bath scene that comes out of nowhere.  To his credit those involved are all different shapes and sizes and proclivities, but it is one of the most awkward orgy scenes I have ever scene.  It's not a tedious slog like Eyes Wide Shut, but more along the lines of just wondering why it was included; it's a complete anomaly to anything in the rest of his movies, and does nothing to further the plot of this one.  Even stranger is the rat catcher (István Bubik) and his rat killing car.  The thing looks neat at first until it turns into a fest of bad CGI and really does nothing but set up another one of the many pointless kills in this.  I say pointless because, unlike the version of The Phantom of the Opera with Robert Englund, most of these have no purpose.  Sometimes that was forgivable in other Argento films, but this movie is based on an existing property with an actual linear plot.  Some surrealism is excusable, but absolute nonsense is not.
Julian Sands does his best, but it is obvious that by this point he was willing to do anything for a paycheck, including say a line like, "Your perfume! Your feminine smell flows through my veins like the melody of the rolling ocean!"  I know Argento co-wrote this adaptation, and someone really should have mentioned to him the connotations "feminine smell" has in English.  This predates Anakin Skywalker's speech about how he hates sand, but it is up there with that as one of the worst lines in movie history.
The sad thing is there are still times during The Phantom of the Opera where Argento shows what a great director he is, with the filming in the caves and his use of color and camera motion.  However, once again, Queensrÿche could still play their instruments and sound a little like themselves by the time the late 1990s came around.  It's just whenever they did anything good, it made one wonder why they were wasting time making the garbage they were.  That applies here as well.  Watching this movie, which should have been a slam dunk for Argento if he just did a straight adaptation of the novel, is like if Werner Herzog decided to make a documentary on the Teletubbies.  On the other hand, I could justify watching that over ever having to sit through this again.
The Phantom of the Opera (1998)
Time: 99 minutes
Starring: Asia Argento, Julian Sands, Andrea Di Stefano
Director: Dario Argento