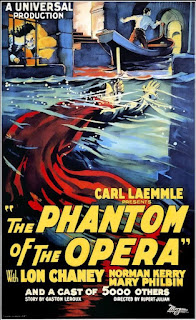 Like many of Universal's classic monsters the Phantom of the Opera had literary beginnings, with the movie being based on Gaston Leroux's 1910 novel.  Before becoming a fiction writer he had been a journalist, and one of the stories he had covered was the discovery of cells under the Paris Opera where prisoners had been held and tortured during an insurrection in 1870, which undoubtedly played a large part in the formation of his novel about a deformed madman living in the lair he constructed under the opera house and his obsession with a young soprano.