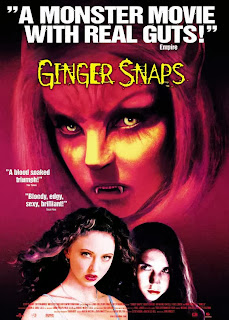 Ginger (Katharine Isabelle) and her sister Brigitte (Emily Perkins) are outcasts at their high school and constantly obsess over death and photographing each other dying in various ways.  This often brings them into conflict with the more popular kids, including Trina (Danielle Hampton), who targets Brigitte during field hockey practice.

In revenge, the sisters decide to kidnap Trina's dog and make it look like it fell victim to the Beast of Bailey Downs, an animal which has been responsible for the death of a number of pets in the area.  While out they find its latest victim and, while preparing to photograph it, Ginger begins her first menstruation.  Not only is it inconvenient, but the smell of blood attracts the beast, which happens to be a werewolf.  It attacks Ginger and drags her off, but she escapes and the werewolf is inadvertently killed when local drug dealer Sam (Kris Lemche) hits it with his van.

The girls quickly find out that everything they ever learned about werewolves is a lie.  Silver has no effect, and the transformation doesn't wait for the full moon; well, at least not the full transformation.  Ginger becomes increasingly aggressive, both physically and sexually, grows claws, sharp teeth and a tail.  It also seems that she can spread the disease in more ways than just scratching or biting.

Brigitte becomes more and more concerned as the Ginger's affliction causes a rift between the sisters.  Seeking Sam's help, she finds a cure.  However, Ginger is graduating from dogs to bigger prey, and the bodies begin to pile up as the final transformation looms.

As you can probably tell by the fact that menstruation is involved early on, lycanthropy in Ginger Snaps is a stand-in for puberty.  And not a subtle one, either.  Both girls are late in starting, and it is obvious that Brigitte is jealous of her sister growing up first, while Ginger is quickly abandoning many of her childhood fantasies.  There are hints that this is happening even prior to the attack.

What the movie does right is not to make Ginger a sympathetic victim.  She is about as unbearable as any teenage girl, wolf or not.  It also does not try to turn things into a Twilight-style romance.  I know this came out before those books were truly popular, but a lot of juvenile fiction even prior to that series made the mistake of adding in idealized love interests for the female reader.  Happily, Brigitte stays herself throughout, not coming out of her shell.  The whole situation is handled about as realistically as one could expect.  It also does have plenty of humor.

I know there are two sequels to this, and I'm kind of curious to see how, since this one pretty much wraps itself up at the end.  I know some people thought the werewolf was a bit dodgy, but I'm just happy to see practical effects being used, and I thought it was rather effective.