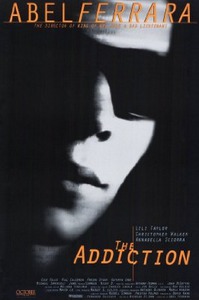 Kathy Conklin (Lili Taylor) is a graduate student at New York University.  Walking home from a lecture, she is accosted by Casanova (Annabella Sciorra).  Casanova is a vampire and, after a conversation, encourages Kathy to tell her to go.  Kathy, instead, gives in and is bitten.

After being released from the hospital and admonished by the police, Kathy starts to go through a change - vomiting blood, wearing sunglasses to protect her from the sun and covering the mirrors in her apartment.  She also finds that she is craving blood.  When extracting with a syringe doesn't do the trick, she applies the more traditional hands on (or fangs-on) method we are all familiar with, creating a number of other vampires in her wake in order to slake her thirst.

Along the way she meets Peina (Christopher Walken), an older vampire who has managed to largely overcome his addiction to blood, only to find his lifestyle unbearable and his words hypocritical, as he feeds off of her.  Finally, after a number of attempts to throw off the addiction, Kathy gives into it, before ultimately seeking a final solution to her problem.

Abel Ferrara is a frustrating director.  I like a number of movies he has made (The Driller Killer and The Funeral chief among them), and he seems to range from exploitation to flawed art house to pure exploitative trash.  Here he tries to for the middle one, presenting vampirism as an allegory for heroin abuse (something done before in The Hunger and alluded to in many vampire movies before and since) with a heavy dose of philosophizing about the nature of evil in humanity and the possibility of ultimate redemption.

In the end most of the movie turns into a jumbled mess.  The parts with Walken are interesting, as is the take on vampirism, but too much of the film is Lili Taylor reading lines of classical literature and pondering her fate in a monotonous, repetitive narrative.  Much of this may have been intended, but it is no less grueling to watch.

Still, it is far from a bad movie.  It is just that Ferrara's intentions get buried, and the jumbled ending doesn't help either.