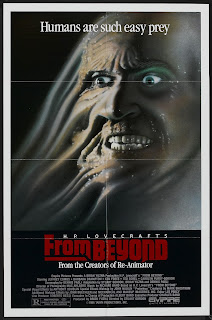 Stuart Gordon is one of those horror directors that unfortunately didn't break out into the mainstream like John Carpenter or Sam Raimi.  I think the only movie he made that had a major theatrical release besides The Re-Animator was Fortress, and the former is largely known from when the uncensored version was released on video and the latter should be more well-known but isn't.  I think part of the reason Gordon didn't break into the mainstream, however, was because he and frequent collaborator Brian Yuzna spent a good amount of time adapting the works of H. P. Lovecraft.
By adapting, I honestly mean taking a story that was a few pages long, incorporating the general elements of said story (and using the names of characters in it), but putting it in modern times and, with their cowriter Dennis Paoli, making it something much different.  Despite this they still maintained the spirit of Lovecraft, and after the success of The Re-Animator Gordon decided to follow in the footsteps of Roger Corman's Edgar Allen Poe films from the 1960s and make a series of Lovecraft-based movies with the much of the same cast.  Therefore, his follow-up was From Beyond.
Crawford Tillinghast (Jeffrey Combs) is a physicist working with his mentor Dr. Edward Pretorius (Ted Sorel) on a machine called the Resonator.  What the Resonator does is stimulate the pineal gland, making anyone within the machine's field of influence see into an alternate dimension.  Unfortunately, it also allows the creatures in that dimension to see things in ours as well, which leads to Pretorius's demise.
Tillinghast is arrested for Pretorius's murder, but is put into the custody of Dr. Katherine McMichaels (Barbara Crampton) and officer Bubba Brownlee (Ken Foree), as McMichaels thinks the way to find out what really happened is to re-run the experiment.  This they do, only to find out that Pretorius has melded with thing that attacked him, and that reactivating the machine has provided him a way back into our dimension.
While Gordon was never known for being a stylistic as some of his contemporaries, the one thing his movies do have are bright, garish colors (showing some obvious influence from Mario Bava) and a tendency to have gooey, disturbing special effects that, unlike a lot of low-budget '80s films, are also brightly lit.  We have interdimensional worms and jellyfish, whatever it is that Pretorius is becoming (the obvious parts appear to be a phallus with mandibles), giant aquatic worms and swarms of predatory insects.  Some of the budget shows here and there, but it's quite a feat that he could do what he could. Gordon saved quite a bit of money on crew by filming in Italy, thus cutting down the actual production costs so he and his effects artists could get what they wanted.
Jeffrey Combs is great at playing eccentric or crazy.  Even though he honed it to its best form as the FBI agent in The Frighteners, his portrayal of the shellshocked Dr. Tillinghast is striking, often bordering on the comedic.  He is one of the few people on Earth that could deliver some of the lines in this movie with a straight face and make them convincing.  Barbara Crampton is a better actress than her scream queen reputation would give her, and she also pulls off being able to have fun with her role while making it believable, particularly at the very end.  Ken Foree is also well aware what type of movie he is in this time around and has fun with it as well.
While not as good as his first movie, From Beyond contains all the elements I love about '80s horror, particularly in regards to the fact that there are no rules.  Anything can happen, and it does.  Some of the sexual aspects of this may be difficult for some viewers, particularly in the way McMichaels is handled by Pretorius, and part of the script seemed to be written as an excuse to get Barbara Crampton into a leather bondage outfit.  I have no complaints on the latter, and in truth the ideas of being assaulted and invaded, while handled in a much more crass fashion than David Cronenberg, are right in line with his films.
At its heart, though, From Beyond is a b-movie, with performances and dialogue to match and effects that are surprisingly not as cheesy as the script.  It still remembers that much of what made The Re-Animator such a great film were the comedic elements and, though everyone plays their roles straight, Gordon doesn't make the mistake of taking everything too seriously.  From Beyond  still ends up being one of the few Lovecraft movies that translates an "indescribable horror" onto the screen, puts it in broad daylight, and still makes it feel like something that could truly drive a person mad.
From Beyond (1986)
Time: 85 minutes
Starring: Jeffrey Combs, Barbara Crampton, Ken Foree, Ted Sorel
Director: Stuart Gordon