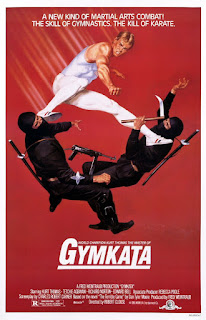 Director Robert Clouse definitely has a unique distinction.  He was responsible for directing Enter the Dragon, the last movie Bruce Lee completed before his death and also one of the best martial arts films ever made.  He also was responsible for this movie, which often turns up on lists of the worst movies ever made.  Not just martial arts movies, but movies in general.
To be honest the closest thing he directed that was even near the level of Enter the Dragon was its intended follow-up, Game of Death, which down the road was finished with body doubles of Bruce Lee. Personally, I have always wondered how much of these movies Clouse did direct because, without Lee, his attempts at making other films (like Black Belt Jones) featured rather clumsy fight choreography and a directing style that could generously be called competent.
That generosity barely extends with Gymkata.  Jonathan Cabot (Kurt Thomas) is recruited by a government agent to go to the country of Parmistan.  The U.S. would like to place an early warning satellite base in their country and the only way to do so is for someone from the U.S. to win the Game, an annual ritual featuring endurance and fighting tests that no outsider has won in 900 years.  Cabot himself has some stake in winning the game as his father (Eric Lawson) disappeared in Parmistan.
Cabot is already an expert gymnast but in order to win the game he must learn to combine his skills with martial arts.  Helping with his training is Princess Rubali (Tetchie Agbayani), the daughter of Parmistan's Kahn (Buck Kartalian) and the intended bride of its military commander Zamir (Richard Norton).  While the Kahn has been preparing to open Parmistan up to the rest of the world Zamir wants to keep things as they are and has been gathering his allies to take over.  Jonathan and the Princess fall in love, naturally, so Cabot must win the game in order to get the Princess, save Parmistan, rescue his father and keep the Soviets at bay.
The title of the movie is never mentioned, although it seems this style of martial arts works best in a country with strategically placed gym equipment that is often kept powdered in case it needs to be used.  Luckily, Parmistan is just such a place, as is the city of Karabal, by the Caspian Sea.  I honestly don't know if that's the intended full name but it is how it is referred to frequently and in the title cards.  It is the only way to get to Parmistan, which means taking pack mules and doing some whitewater rafting.  The Game itself seems to have rules, but other than not avoiding the obstacles I can't fathom what they are.  Some contestants are targeted by the guards and judges, while others are left unmolested, and no one really seems to care if the contestants try to kill each other.  One of the biggest obstacles is a town where the country dumps their criminally insane.
It is all ridiculous beyond belief, and to say a movie with a country called Parmistan is cheesy may be low-hanging fruit, but there it is.  The script was written Charles Robert Carner, based on a book called The Terrible Game by Dan Tyler Moore.  The book, from what I understand, is a pulpy but serious mashup of Cold War paranoia and medieval fantasy.  Gymkata tried to be some of the same and it is through this serious tone and strange attempt at world building that the movie slips from just being a mediocre martial arts film and into cult film territory.  It is quite stupid, it is quite bad, but it is never unwatchably so.  It is just the opposite, almost daring the audience to keep watching just to see what inane insanity they will come up with next.
Kurt Thomas, though obviously a skilled competitive gymnast, is certainly no actor, and often comes across more childlike than intended.  Tetchie Agbayani is there mainly for eye candy and to have at least one Asian in a martial arts film, while Richard Norton makes a passable bad guy.  The guy who does often steal the scenes he is in is Buck Kartalian as the Kahn, with shouts of "Yak-Malla!" and a giddy old-man personality that contrasts with a xenophobic country that makes visitors pass an endurance test.  By the time one is asking why this isolated country seems to have their leader addressing everyone in English and has littered the countryside with improvised gym equipment the movie suddenly comes to its abrupt end.
It is one more example to me why, unless the director is Quentin Tarantino, martial arts films should not be made in the United States.  Even when someone figures out how to film them right it turns into a jingoistic cheese-fest.  At least Gymkata is so over-the-top ridiculous that it provides an hour and a half of chuckles along with the required face-palming.
Gymkata (1985)
Time: 90 minutes
Starring: Kurt Thomas, Tetchie Agbayani, Richard Norton, Buck Kartalian
Director: Robert Clouse