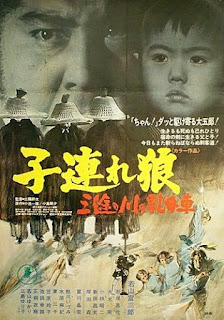 Although I quite liked Lone Wolf and Cub: Sword of Vengeance, I did feel like it spent too much time on an origin story before going off on a different tangent all together.  The flashbacks amp up the idea of revenge, introduce a rather interesting bad guy and his clan, and then have our hero and his son head to deal with a bunch of thugs at a hot spring that are involved in a completely different kind of clan intrigue.  This in no way changes the fact that it is quite a fun movie with some serious spaghetti western vibes.
The first movie and Lone Wolf and Cub: Baby Cart on the River Styx were edited together (with a lot of the exposition removed) to make Shogun Assassin, which was released eight years later and had the American who did the editing take the directing credit rather than Kenji Misumi, who did a wonderful job on both of these films.  I guess he was thinking that by doing so it was thought that they were getting around the biggest flaw in the first film, but after watching the second I do appreciate the way the movies are similarly assembled and follow the same pacing.  However, it is best to keep them as two movies, since the second is definitely superior.
Ogami Itto (Tomisaburo Wakayama) and his son Daigoro (Akihiro Tomikawa) are still wandering the countryside as assassins for hire.  This does not sit well with the Yagyu clan, who were responsible for his fall from grace as head executioner for the shogun.  Yagyu Sakaya (Kaya Matsuo) has trained a group of female ninjas and she, along with some male counterparts, set out on a quest to kill Ogami, eventually deciding to kidnap Daigoro.
After Sakaya's plans fail Ogami and Daigoro head off to do the job they were hired to - kill three master assassins and the man they are guarding that has trade secrets for a certain region's dye process.  He's agreed to sell the secret to the Shogun for sanctuary, thus robbing the region of their main source of income.
One of the reasons I like Baby Cart on the River Styx better than Sword of Vengeance is that Daigoro is no longer just a spectator.  He is given things to do; not a lot since he's still a toddler, but it is obvious that he is quickly learning from Dad on how to survive.  I also like that the Yagyu clan, at least for the first half of the film, are more involved, as it was their greed and betrayal that set Ogami and Daigoro on their paths.  While the battle with the ninjas is only part of the movie Yagyu Sakaya is in the film throughout.
For the job he was hired to do he must board a ship and track the BenTenRai brothers, each one which has their own special weapon.  He isn't the only assassin on the job, and his task is made harder by the amateurs that have also been paid to deal with them.  The final fight between him and the brothers takes place in a desert region - filmed in the Tottori Sand Dunes, if I'm correct, which is Japan's desert.  And, yes, I had to look up to find out if Japan had a desert, which I'm now determined to visit if I ever get to Japan.
Visually Kenji Misumi is doing a wonderful job, even if the shot of Ogami and Daigoru walking between fire and water isn't in this one.  Truth be told I probably should credit Misumi for not going back to that shot, since it is such a striking one that it would easy to rely on it too much.  The film, like the first one, is quite short, so there is little retreading what happened; it was pretty much expected one would still know what happened in a movie that came out earlier in the same year.  There are plenty of scenes of extreme violence, blood spraying everywhere in exaggerated gushes, but it fits the style.  Also, despite the more fantasy feel this time around, Ogami himself seems a lot more human despite his brags about having supernatural guidance.
Lone Wolf and Cub: Baby Cart on the River Styx (1972)
Time: 81 minutes
Starring: Tomisaburo Wakayama, Akihiro Tomikawa, Kaya Matsuo
Director: Kenji Misumi