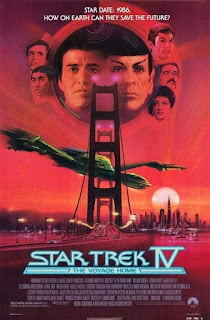 A quirk of warp technology combined with using a star for gravity assist was established early on in the first season of Star Trek as a way of traveling back in time.  Although other methods popped up here and there - dimensional doorways and large-scale machinery used to open such - the series came up with a somewhat scientifically plausible way for the Enterprise to head back to the "modern" day whenever the budget began to run dry.  It was also much more of a believable method than the Earths with parallel evolution (right down to the same plate tectonics) that popped up every now and then.
The truth was some of those time travel stories were the best episodes.  "City on the Edge of Tomorrow" is one of the standout episodes from the entire series and even the episode with Gary Seven is quite a lot of fun.  The penultimate episode of the the Original Series involves an entire society that has shipped itself back in time to avoid dying in a supernova, and it is a much better ending episode for the show than the one that we got.  At some point it was inevitable that, given that these are some of the more fondly remembered episodes, there would be some temporal exploration in the movies.
Once again we are starting almost immediately from the previous movie.  Spock (Leonard Nimoy) is still recovering from death, while Kirk (William Shatner) and the rest of his core crew have sought asylum on Vulcan as they are tried in absentia for the crimes they committed in Star Trek III: The Search for Spock.  While the United Federation of Planets seems more than happy to tell the Klingons where they can get off on their demands that Kirk be extradited, there is still the matter of sabotage, theft and willful destruction involving two of Starfleet's ships.  Kirk and the rest decide that it is time to do the right thing and head back to Earth and face the consequences.
Problem is there may not be an Earth to go back to.  As they pilot their stolen Klingon ship, renamed the H.M.S. Bounty, homeward they find that the Federation has bigger problems.  A strange probe, broadcasting a signal that disrupts their systems and is causing havoc with the oceans and atmosphere on Earth, has arrived.  After some effort Uhura (Nichelle Nichols) is able to futz with the signal and Spock determines that the it is whale song - specifically that of humpback whales, which in the 23rd century have been extinct for quite a while.  With no other hope available for communicating with the probe Kirk hatches a wild idea - travel back to the 20th century and get him some whales.
I have to say that one of the things I like about Star Trek IV is it negates one of my big complaints about the other films before it.  This story by Leonard Nimoy and Harve Bennett does something that should have been done before, and that is give all the core members of the cast something to do.  They all have reasons for being there, all have missions when they arrive in 1986 San Francisco, and all get to have a time to shine.  Whether it be comic relief with Chekov (Walter Koenig) and Uhura, or Dr. McCoy (DeForest Kelley) wanting to practice his own type of medicine and not caring about temporal anomalies - even after lecturing Scotty (James Doohan) about it - it is refreshing to see the crew treated like a crew instead of just throwing a bone to the various actors so they can earn a paycheck.  Sulu (George Takei) even gets to stretch his legs and fly a helicopter.
As for Kirk and Spock we get some great scenes with both of them, together and apart, and we happily get low-key Shatner again.  He gets a bit of a love interest with Gillian (Catherine Hicks), a whale expert who just happens to be the caretaker for a couple of humpbacks at an aquarium in Sausalito.  Then again, she gets to be more than just a flavor-of-the-week, with Nimoy and Bennett giving her a significant place in the plot.
Best of all the movie is lot of fun.  This, even more than Star Trek II: The Wrath of Khan, would be a way to introduce someone who is not that familiar with Star Trek to its universe.  The reason I say more is because, since it is 35 years later at this point, it is quite obvious that Spock isn't permanently dead after that movie.  The Voyage Home, even though it is the last part of a trio of great films, works well as a movie on its own, with the time travel elements and the fish-out-of-water humor.  Once they are hooked there's no reason why someone wouldn't watch this again as part of a regular run through the movies, and for the uninitiated it's not too hard to just explain what happened in The Search for Spock and get on with it, since that really only matters for explaining why Spock is so weird and why there's a court martial.
Leonard Nimoy would go on to direct a hit non-Trek film, Three Men and a Baby, after this, and while he would play Spock up through the beginning of the reboots he never returned to direct another Star Trek film.  That is too bad because it was obvious that once he became invested in the world that he had struggled to get out from under for so many years it was obvious that he had an affinity for it.  Unfortunately, it led to Shatner going, "What about me?" and wanting to direct as well.  That experience would pretty much solidify that the odd-numbered movies were probably best to be avoided.
Star Trek IV: The Voyage Home (1986)
Time: 119 minutes
Starring: William Shatner, Leonard Nimoy, DeForest Kelley, James Doohan, George Takei, Walter Koenig, Nichelle Nichols, Catherine Hicks
Director: Leonard Nimoy