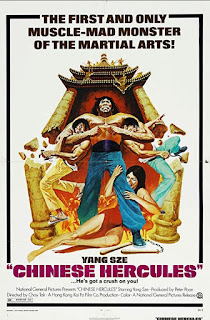 I can understand someone being quite confused with the poster for the movie.  It prominently features Bolo Yeung, and certainly he's big enough to earn the title of the movie.  However, when watching it, Michael Wai-Man Chan is the star, and he is quickly known by his dock worker friends for being able to carry 200-pound bags of rice and run with them.  By that definition either one could be a Hercules, but I can understand that Yeung commands more of a visual presence.
As for the movie, it is from one of the lesser Hong Kong studios.  That does mean lower budget, but doesn't necessarily mean lower quality, as Ta Huang proves to be a skilled visual director and is good at filming the fight scenes.  Unfortunately I don't know if a better print than what I saw was available, as the English dub I saw had definitely seen better days.  Despite that, and despite the fact the main plot has been done many times over, it still turned out to be enjoyable.
Shen Wei Ta (Chan) gets into a fight with his girlfriend's (Fan Chiang) brother and thinks that he has killed him.  Vowing to never uses his fists again he flees and begins working at a pier under an assumed name.  Unfortunately the village where the pier is located is controlled by Boss Chan (Tin Leung).  Chan is greedy and agrees to sell his pier to a crime syndicate, suddenly putting all the men in the village out of work.
When the pier foreman (Yun Ho) decides to go up against the syndicate boss (Yeh Fang), he is mortally wounded by the boss's henchman Chiang Tai (Bolo Yeung).  His dying wish is for Shen Wei Ta to put his vows aside and defend the village.  The choice is made even harder when his girlfriend arrives looking for him.  Faced with no other choice he decides to make his stand.
Bolo does what he is paid to do - look big and threatening - while giving us three good fights, one which foreshadows the the final one and, at long last, the one between him and Chan to close out the film and provide our main character some redemption.  Unfortunately all the fights are accompanied by stock punch and kick sounds that just go make the movie feel cheaper than it has to.
Hopefully somewhere there is a much better print of this, hopefully in Mandarin, but even so it's such a predictable and tried-and-true story.  While it is executed decently, and is better than could be expected, Chinese Hercules is not a lost gem by any standard.
Chinese Hercules (1973)
Time: 90 minutes
Starring: Michael Wai-Man Chan, Fan Chiang, Bolo Yeung, Yeh Fang, Yun Ho, Tin Leung
Director: Ta Huang