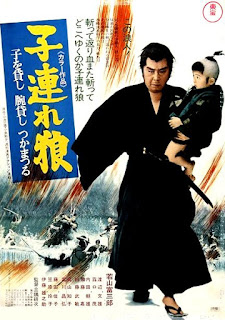 I often complain about a lot of comic book movies being all origin story and exhibition with a bad guy in there somewhere that doesn't really figure into the action too much.  If he does, it's not until the end and it's brief.  Then there is the big bad guy, hovering about, but there is never a real fight with him; instead we have to go off on another story after every time he shows up to spout some exposition but not contribute anything more than that.
The reason I bring this up is, although they are called manga to distinguish the stories from American comic books, manga are still comic books.  While Lone Wolf and Cub: Sword of Vengeance is not about a superhero the story still follows the same basic line, and it is based on a character created for a manga series.  The series is a classic in the chanbara (or swordfighting) genre of Japanese movies, and from what I understand the sequels largely excel in telling better stories, but this first entry is severely hampered by a need to dump a lot of back story before getting on with the movie's plot.
Ogami Itto (Tomisaburo Wakayama) is the shogun's head executioner.  His position is coveted by the Yagyu clan, so they send assassins to kill his wife and to plant evidence to make it look like he is guilty of treason.  Instead of committing suicide as he is asked he takes up life on the road as an assassin along with his son Daigoro (Akihiro Tomikawa), who is still an infant.  While traveling Ogami is hired to go to a hot spring where a band of outlaws have gathered at the behest of a lord who is seeking to intercept another lord traveling from Edo to his lands.
While I may be voicing some frustration at the fact that there is a lot of exposition and not a lot happening, when things do happen they show the promise of what this story can deliver.  The fight against the Yagyu forces on the canal (Ogami has special fighting powers on water) is well-staged, as is the final battle with the forces of the outlaws and the ambitious nobles.  Where westerns have definitely cribbed from samurai films, the final portion of this film shows that Japan is happy to play that game as well.
In fact, from the moment Ogami arrives at the hot springs it feels in some ways like many of Clint Eastwood's "Man with No Name" films.  Ogami remains silent most of the time and lets others underestimate him until the time comes to act - although his reputation the fact that he travels with his son has definitely reached across the country.  The problem is this sequence, after seeing some of the background and experiencing the action scenes that go with it, tends to drag, especially since it appears that a gratuitous sexual liaison was shoehorned into the story for titillation purposes.
Largely Sword of Vengeance does what it is supposed to do and gets one hungry for more of the Lone Wolf and Cub story.  This and its sequel were later edited together to form a new movie, Shogun Assassin, but I would wager that seeing the separate movies is a much better experience than that frankenfilm.
Lone Wolf and Cub: Sword of Vengeance (1972)
Time: 84 minutes
Starring: Tomisaburo Wakayama, Akihiro Tomikawa
Director: Kenji Misumi