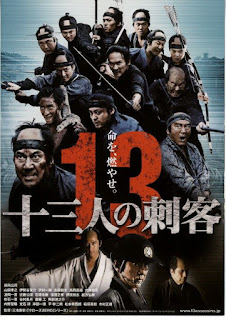 13 Assassins may have a title reminiscent of The Seven Samurai but, although the story does contain the spirit of Akira Kurosawa, it is not Takashi Miike's attempt to imitate the most famous Japanese director of all time.  Instead, this movie is a remake of a film of the title from 1963 that was directed by Eiichi Kudo, just heavily updated for the modern age by Miike.
It is 1845 and the various clans are at peace.  That is threatened by the actions of Lord Naritsugu (Goro Inagaki), the adopted brother of the current shogun.  Naritsugu enjoys torturing and raping for fun, believing all others, including his trusted samurai adviser Hanbei (Masachika Ichimura), are less than him.  Sir Doi (Mikijiro Hira), the adviser to the Shogun, secretly hires Hanbei's former classmate Shinzaemon (Koji Yakusho) to gather a team to assassinate Naritsugu before he secures a place in the shogun's government and thus threatens the fragile peace.
13 Assassins, though it may appear to have some of the tropes of other samurai films, plays more like a heist film, particularly a good portion of the first half where they are getting the boys together.  There is plenty of time spent gathering everyone, and then a good number of scenes of the attack being planned in lots of detail.
Also, they are not getting together to protect a town or village, but instead doing their duty (as they see it) to protect their country from a corrupt influence.  The traditions naturally clash, as Hanbei is appalled that Shinzaemon would choose to go against such a person in power rather than serving as a samurai is supposed to.  It is also nice to see samurai using an instrument they would have used more often - a bow - rather than just making this a series of sword fights.  Indeed, as this is taking place at a later era, the band of warriors uses modern tactics, including subterfuge and explosives, to their advantage.
Since the movie is pretty straightforward - it lets us view Naritsugu's crimes to set up why this must be done, shows us the process of gathering the warriors together and then spends the last hour in an epic battle - it does not take a whole lot of time in developing the various members of the band.  Still, Shinzaemon and his nephew Shinrokuro (Takayuki Yamada) are both memorable, particularly as examples of the new and old guard, and the rivalry between Shinzaemon and Hanbei is quite fleshed out.  Hirayama (Tsuyoshi Ihara) is the one that gets the best battle scene on his own, with his apprentice Ogura (Masataka Kubota) constantly at his side.
One of the most memorable characters - Koyata Kiga (Yusuke Iseya) - isn't even a samurai at all, but is instead a wild man of the forest that may, or may not, be a demon.  Keep in mind that demons in Asian culture are not necessarily evil spirits, but forces of nature, and if Koyata is such, then his decision to become the 13th member, and his constant insults against the ways of the samurai, tend to symbolize how even the very land was starting to reject the old ways and cry out for change.  I do not know if he was portrayed ambiguously in the original, but here Miike leaves it open on whether or not he is human or something else entirely.
The centerpiece of the movie is what the whole first half builds up to and that is the battle between Hanbei and Naritsugu's forces and the samurai under Shinzaemon's leadership.  There are scenes prior to this that are shocking and hard to watch, which are typical elements of Takashi Miike's film, but although the final battle is extremely bloody it shows that he can also film some of the best action sequences.  In fact, this is one of the best battles I have seen in a long time, and it is one of the few of this scale in which I can tell what is going on.  The motion isn't blurred and the different scenes deal with one or two people against the hordes that are coming at them.  Costume design also helps as the different members of both parties stand out, particularly Naritsugu and Koyata.  My only complaint is some of the CGI is not the best, but this is more due to budgetary constraints than laziness, so it can be forgiven.
Although the movie is a remake, and a good part of the first sequence is a shot-by-shot recreation of the original movie, Takashi Miike makes the movie and the story his own.  It is beautifully shot, well-acted and, again, has one of the best action sequences of the last 20 years.  He may not be Kurosawa, but truth is he doesn't need to be, nor does he pretend to be.  It is rare that a remake is done with such passion.
13 Assassins (2010)
Time: 126 minutes
Starring: Koji Yakusho, Takayuki Yamada, Masachika Ichimura, Goro Inagaki
Director: Takashi Miike