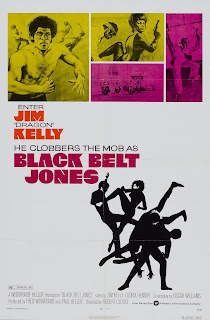 Unlike a lot of blaxploitation stars that wanted to be martial arts experts (Rudy Ray Moore especially comes to mind), Jim Kelly was the real thing.  Although his role in the Bruce Lee film Enter the Dragon was rather small, it was memorable, and Kelly was able to build on that and make a career for himself.  Unfortunately, most of the movies he made were not up to the same level as Enter the Dragon or even his first starring role in Black Belt Jones.
Black Belt Jones (Kelly) is a martial arts expert that trained with Papa Byrd (Scatman Crothers) at his karate school.  Still loyal to Byrd and the school, he finds himself having to defend it when the mafia decides they want to buy out the area, as it is planned for redevelopment and they stand to make money from the sale of the land.  In order to do this they have local gangster Pinky (Malik Carter) and his thugs put pressure on Byrd.  Unfortunately, they accidentally kill him, gaining the ire of Jones and Byrd's estranged daughter Sydney (Gloria Hendry).
Despite being directed by Robert Clouse, who also directed Enter the Dragon, it is quite obvious how much Bruce Lee had to do with the previous movie.  While the fight choreography in that movie is legendary, Clouse films this like a typical American martial arts film, with the camera too close on the action and clumsy choreography.  The good thing is since Kelly and a number of people on the set seem to know what they're doing we don't get many of the usual fight scenes where the fists seem to be in a different county than the faces, but it really needs that added touch of someone who knows how to properly film martial arts.
That said, even though Jim Kelly is just so-so as an actor and everyone fits the usual roles in a movie where the mafia tries to close down the gym, karate school or roller derby rink, it doesn't keep this movie from being a lot of fun.  Kelly doesn't need to be Robert De Niro, so his physical presence does most of the work for him.  He also appears to be having a ball with the film, even when upstaged by Gloria Hendry, who also appears to be enjoying her part quite a bit.  Scatman Crothers isn't in the film for long, but he is memorable as the womanizing, gambling head of the dojo.  Although no one in the mafia stands out as a memorable villain we have Malik Carter flying into comic rages every time Jones and the students best him.
What also makes Black Belt Jones a lot of fun is that it doesn't take itself too seriously.  Sydney can take care of herself, which she makes quite clear (definitely don't ask her to do the dishes) and there is a whole lot of intentional comedy throughout.  One of the actual well-done fight scenes combines both action and humor, as Pinky and his thugs attack the karate school only to encounter Jones, the school's second-in-command Toppy (Alan Weeks) and a whole bunch of students who easily handle the gang as the lights go on and off.  It may also look kind of silly, but the final fight in a bunch of soap suds with Sydney tossing the bad guys into a garbage truck is fun as well.
While Kelly was memorable (and better filmed) in Three the Hard Way, which came out a few months after, Black Belt Jones proved that he had star power on his own.  He did do more than just become a blaxploitation star - he broke the color barrier when it came to martial arts films, and the original run of films from Japan and Hong Kong were well-loved by black audiences in the 1970s.  To see one of their own on equal footing was inspiring, especially since he wasn't flailing away or faking it.  It's too bad he wasn't a bit more choosey on what type of movies he did, but his particular set of skills kept him in the business longer than a lot of his contemporaries.
Black Belt Jones (1974)
Time: 85 minutes
Starring: Jim Kelly, Gloria Hendry, Scatman Crothers, Malik Carter
Director: Robert Clouse