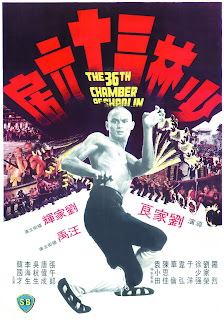 For mainstream audiences this is probably going to be one of the most recognizable Shaw Brothers martial arts films.  If not the movie, then the title would be, as it was rephrased as Enter the Wu-Tang (36 Chambers), a classic hip-hop album by the Wu-Tang Clan, replete with quotes from the English dub of this film.  It should come as no surprise due to the heavy influence martial arts films had on the Black community in the 1970s, and Shaw Brothers turned them out like no one else.
This was also one of the best movies to come out of that studio, directed by Chia-Liang Liu and featuring an epic plot and colorful sets.  It's unfortunate that it originally hit the United States under such a generic title as Master Killer, when The 36th Chamber of Shaolin is a title that contains a sense of mystery and adventure.  It also better sums up this film as it contains themes such as developing self-control, doing one's duty to society as well as the need for institutions to change with the times.
San Te (Chia-Hui Liu) is a young ethics student at a local college in Guangzhou.  His teacher, Mr. Ho (Hung Wei), is involved in a movement to overthrow the General Tien Ta (Lieh Lo), who along with Lord Tang San-yao (Tang Wei-cheng) are collaborating with Tartar invaders against the legitimate Han rulers.  The efforts of San Te and his follow students to help Ho go badly and he is forced to flee.  Barely alive he arrives at the Shaolin Monastery and is accepted.  Interested in learning kung-fu, he soon finds out that the monastery teaches the art through a series of 35 chambers, with the top reserved for those who have achieved the highest Buddhist ideals.  Over the next few years San Te learns the fighting art, but wishes to add a 36th chamber to teach young men that are not of the order.  While under punishment for even suggesting such a thing he returns to his old town and decides it is time to settle the score.
There are some great fight scenes as can be expected, early on between General Yin (Chia-Yung Liu) and Ten Te as well as the final fights between San Te, the men he has gathered and their oppressors.  A large part of the movie takes place at the monastery as San Te learns to let go of his ego and properly earn his way through the different chambers.  Like many of these movies there is a combination of mysticism and physicality as well as a bit of magic thrown in to keep things interesting.
One of the advantages of watching these movies now is that they are available to us in Mandarin and Cantonese and not just the horrendous English dubs that made it over here when they were first released.  The thing to remember, though, is that many of these movies used the European method of recording the movies without sound and adding in the dubs later, allowing everyone to speak their own languages or dialects and then preparing the movie for the market it was going to.  Hong Kong was still a British territory at the time this was made which meant that, although targeted at Asia, Shaw Brothers was aware there was an international market for these films.  This movie in particular became highly popular in India.
Much of the credit for the success of this movie goes to the beautiful set design, both in the town and of the temple.  It should also go to Chia-Liang Liu, whose kinetic directing adds life to both action scenes and discussions of philosophy and ethics.  He also directed the two sequels to this film as well as a more recent film that would be familiar to Jackie Chan fans, The Legend of Drunken Master.  He is definitely one of the major influences on these movies even now with many of his sudden zoom shots and pans still being widely imitated.
This was my introduction to the Shaw Brothers movies, which is strange that I have gone all these years without checking them out despite knowing that the studio featured an entire range of different films, and I'm certain of varying quality, but now the rest have a lot to live up to after seeing The 36th Chamber of Shaolin.  It deserves its reputation and is undoubtedly one of the most influential movies of its type.
The 36th Chamber of Shaolin (1978)
Time: 117 minutes
Starring: Chia-Hui Liu, Lieh Lo, Tang Wei-cheng
Director: Chia-Liang Liu