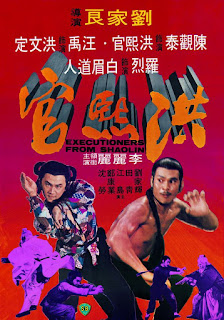 In Kill Bill: Vol. 2 he who is to eventually be killed tells the Bride a story during a flashback to her training with a kung fu master named Pai Mei, played by Gordon Liu.  The story goes that one day Pai Mei was walking down a road and, in a show of respect, nodded slightly to a Shaolin priest who was walking in the opposite direction.  When the priest did not return the nod, Pai Mei went to the temple and demanded the priest's head, which he was understandably refused.  To punish them for their disrespect he killed everyone in the temple from the students on up to the priests.
Also known as Bai Me or Bak Mei, he is an actual historical (and somewhat mythical) figure that betrayed the Ming Dynasty to the Manchu, and is often portrayed as a bad guy with almost supernatural fighting abilities.  That is definitely the case in this movie, where he is able to retract his nether regions, one of his two weak points, in order to capture an opponent's foot and then break both legs before dealing the fatal blow.  We also find him at the beginning burning down the Shaolin Temple and battling the head priest, setting events in motion for Hung Hsi-Kuan (Kuan Tai Chen) to declare vengeance in the name of his master and his brothers and spend years training in order to defeat Pai Mei (Lieh Lo).
Surprisingly, rather than being a straightforward revenge movie, we get to follow Hung Hsi-Kuan through his life as he marries Fang Yung-chun (Lily Li), a feisty practitioner of crane style kung fu, a style that Hung Hsi-Kuan stubbornly refuses to learn.  We also follow the life of his son, Hung Wen-ting (Yue Wong), who learns elements of both his mother and father's styles.  It largely plays out the same way many legends do, with generations attempting to bring down the bad guy as a brave set of rebels hope to bring the true rulers back into power.
It's Shaw Brothers, so it's colorful and well-made, and not as stagey as some of their other productions.  The fights scenes are well-choreographed and there is a lot more comedy in this than one would expect from the title, but it flows nicely with the rest of the story.  Some of the dubbing is corny as usual, but it's much better done than some of the studio's other films, and the performances do stand out even with the English voices.
The other thing to note is that it is obvious that this film highly influenced Tarantino.  Pai Mei, under all the different iterations of his name, means something along the lines of the "white-eyebrowed guy", and he looks quite similar here as he does in Kill Bill: Vol. 2, although he is a much more meditative character.  He exudes a peculiar confidence as if he believes what he is doing is right.  It's not the typical laughing evil chamberlain role, and Lieh Lo pulls it off wonderfully even if he is only in a handful of the scenes.
Executioners from Shaolin is still far from a perfect film, having a number of rough edits in places and Yue Wong being a bit of an acquired taste, at least in his role here, although the ending fight is great.  It also just suddenly ends without wrapping things up a bit more, which is a pity because after spending so much time with Hung Hsi-Kuan and his family it would have been nice to see everyone achieve some sort of peace.
Executioners from Shaolin (1977)
Time: 98 minutes
Starring: Kuan Tai Chen, Yue Wong, Lily Li, Lieh Lo
Director: Chia-Liang Liu