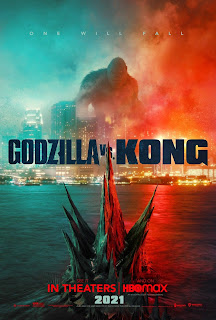 I must be getting somewhat lucky lately with movie posters that deliver what they promise.  This latest entry in the MonsterVerse promises the first matchup between these two heavyweights since 1963's King Kong vs. Godzilla.  It also promises a world of teal and orange.  Get used to those colors because, except for a few exceptions, those are the only ones that'll be present for the next 113 minutes.
Also be prepared have a remote close so the volume can be adjusted up and down as needed.  With all the money thrown at this it would be nice to be able to clearly hear the dialogue.  Maybe someone has realized that nobody comes to these giant monster battles to hear speeches, but Godzilla: King of the Monsters had even less plot than this, and I didn't have to sit through a bunch of mumbling or strain to hear what little exposition there was under the soundtrack.
This is quite disappointing as I have been looking forward to Godzilla vs. Kong.  I loved Godzilla: King of the Monsters.  In fact, I quite liked Kong: Skull Island.  The only movie I've been kind of lackluster on in this series so far was the first Godzilla film, as it promised what this film delivers in terms of monster battles but failed miserably.  I have loved these films since watching them as a kid and understand that, absent having to deal with a little kid in shortpants, that as long as the suits didn't look too ragged the movie was at least going to be fun.  Still, I don't fondly remember the one time I saw King Kong vs. Godzilla, even though it has been a long, long time.  It was made as a comedy, and it is not one of the Godzilla films that pops up too often.  The one with Jet Jaguar is more popular.
This time around director Adam Wingard and his committee of writers were determined to take this a bit more seriously, and they do to a point.  We get a whole plot about Hollow Earth, obviously ripped from Jules Verne, but also something that was meant for (and abandoned, probably due to budget reasons) the original Godzilla series.  On top of that we have as one of the main characters a conspiracy theorist named Bernie (Brian Tyree Henry) mumbling throughout and, although I have never been known to be woke or overly sensitive, the last thing that is needed is some validation of conspiracy theories.  Obviously the character is right about most of what he is going off about, even if it is only possible to hear maybe a quarter of what he says.
Madison Russell (Millie Bobby Brown) is back from the last film, this time being a bit more proactive in pursuing the corporation Apex, run by Walter Simmons (Demián Bichir), who seems to have attracted Godzilla's ire.  No one knows that Apex is up to something and, being concerned that Godzilla has just decided to start killing humans for fun, disgraced geologist Nathan Lind (Alexander Skarsgård) is tasked by Simmons to go into Hollow Earth and tap into a power source that may be strong enough to defeat the giant lizard.  To get there they need special ships and Kong's help.  The concern of Kong's keeper, Ilene Andrews (Rebecca Hall), is that by taking the ape out of containment Godzilla will realize his ancient nemesis is alive and come after him.  It also becomes apparent when Ilene's deaf adopted daughter Jia (Kaylee Hottle) reveals that, rather than being a big dumb ape, Kong is is an intelligent being on the level of humans.
Far from being the annoying child, Jia is one of the few humans worth mentioning, although Millie Bobby Brown is a decent enough actress that she carries her portion of the film as well (and also hopefully reminds the makers of Stranger Things that maybe they should get another season out before she's voting age).  The rest, although solid in what they do, just run around spouting a few lines and looking on as our two real stars rip the place up.
Kong, Godzilla and the rest of the monsters all look wonderful.  It was definitely the right decision to make Kong look like a giant human ancestor and less like just a big gorilla, though he's always been the sympathetic character in his own films, even going back to 1933.  The problem is everything else in this movie looks like a video game from 10 years ago.  I didn't mind it so much in the last film, but at least that often looked like real environments.  These looks like cutscenes.  If this is what we are going to get, and everything being some shade of orange and teal to boot, then it would be better to just forego the movies and release this as a series of video games.  I might even like the human characters better that way, and they might have more impact, if I'm playing one of the big guys and protecting all my friends from destruction while dishing out quite a bit of it myself.
This is not a series where I expect big revelations or major plots.  In fact, I would be happy with the humans more in the background and the creatures being the stars they were meant to be.  That may happen, and I hope that when it does Wingard, or whoever the Chinese government puts their stamp of approval on as a director, decides to at least give us something that looks like a movie.
Godzilla vs. Kong (2021)
Time: 113 minutes
Starring: Alexander Skarsgård, Mille Bobby Brown, Rebecca Hall, Kaylee Hottle, Brian Tyree Henry
Director: Adam Wingard