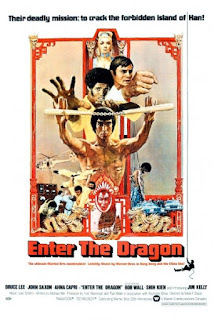 Do I have to say much about Bruce Lee?  He is arguably the most famous martial arts film actor next to Jackie Chan, but has the dubious distinction of starring in a number of films while not actually walking the earth at the time.  Game of Death went as far as featuring footage from his funeral. He made a number of renowned films in Hong Kong prior to Enter the Dragon, created his own martial arts style and tried his best to promote his culture and philosophy to the world at large.

As luck would have it, the movie he is most known for today was the one he made shortly before his death.  Enter the Dragon was one of the few movies of its type that actually bridged the gap between East and West film making, as even today it is hard to find anyone in Hollywood that can properly film a martial arts fight scene.  They still typically bring in Hong Kong choreographers to do the work. Here, Lee did most of the work, even a good portion of the directing if rumors are true.

Lee (Lee) is a trainee at a martial arts school who is contacted by British Intelligence.  A man named Han (Kien Shih), who used to be a student at the school, has founded his own institution on a private island.  However, rather than teaching martial arts, he appears to be building an army to support his drug and white slavery trades.  Another agent, Su Lin (Angela Mao) was sent to infiltrate Han's fortress, but they fear she may have been compromised.

Lee agrees to attend a martial arts tournament to be held on Han's island.  Along the way he meets American martial artists Roper (John Saxon), who is hoping to win the contest to pay his gambling debts.  Roper also meets a former compatriot with whom he fought in Vietnam, Williams (Jim Kelly), who had the flee the U.S. after attacking two racist cops that cornered him in an alley.  Roper and Kelly initially take advantage of Han's hospitality, while Lee contacts Su Lin and realizes things are worse than they seem.

Williams has the unfortunate luck of being observed outside while Lee is forced to incapacitate some guards during his investigation, and becomes a prisoner of Han - something that Roper is quite unhappy about when Han shows him around in attempt to get the American to join his operation.  Instead, Roper throws in with Lee, who has his own motivations for revenge; turns out his sister committed suicide to escape being raped by a band of Han's men led by Oharra (Bob Wall), Han's chief henchman.

There is not a whole lot of plot here, but in the end it isn't really the point.  It's fight the bad guy, get revenge, kind of rescue the damsel, with some of the most famous fight scenes in cinema history.  Han uses a number of attachments on his missing hand to equalize things, Lee relies on his discipline and skill while Roper relies on brute force.  Unfortunately, Jim Kelley, who was extremely skilled in martial arts, is not given enough to do.  Happily, he got a chance to shine in Black Belt Jones, Three the Hard Way and a number of other films that showcased his skills. Here, outside of his fight with the cops at the beginning, he is mainly left to be a plot device to get Roper motivated to do the right thing.

But that's a bit of quibble when we have Bruce Lee punching a cobra (for real), kicking the stuffing out of Oharra and fighting Han in a hall of mirrors.  I don't think the last part has ever been equaled, even in Hong Kong, although it's possible that the Shaw Brothers may have done something its equal.  We may have seen its equal down the line, had Lee lived.  Happily, he did leave us this to cap off his legacy, despite how so many exploiters (including the director of this movie) tried to besmirch it in the quest to milk his memory for cash.