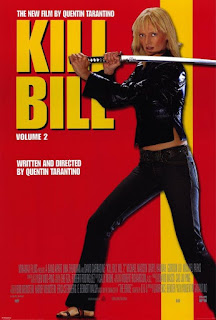 Kill Bill: Vol. 1 was a crazy, fast action film, giving Quentin Tarantino the chance to pay homage to his favorite martial arts films.  It was kinetic, almost non-stop action, forgoing the usual long conversations that stretch out many of Tarantino's films.  We had a woman known as the Bride (Uma Thurman), aka Black Mamba, who used to be part of a team of assassins led by a man named Bill (David Carradine).  Obviously she was out to kill him, and for good reason: he shot her during her wedding rehearsal, leaving her in a coma and to believe that her daughter, whom she was pregnant with at the time, was gone forever.
Kill Bill itself was supposed to be a four-hour epic revenge film, but Tarantino decided that it work better divided into two parts.  Personally, I feel it is a wise decision.  Part one has her going after Vernita (Vivica A. Fox) in her suburban home before flashing back to her battle with O-Ren Ishii (Lucy Liu) and her mob of bodyguards known as the Crazy 88s.  Vol. 2, in contrast to the energy of the first part, is more in line with what one has come to expect from a Tarantino film.
We open with the Bride on her way to meet Bill, but of course we must find out what happened to Elle Driver (Darryl Hannah) and Buddy (Michael Madsen).  But, even before that, we get to see the event that kicked off the whole thing.  Back to the other flashback, Buddy isn't as dumb as he looks, and seems to get the drop on the Bride and buries her alive.  Figuring that's the end of it he contacts Elle to sell the Bride's Hanzo sword, but Elle is not too happy about being denied her revenge.  She has nothing to fear (or maybe everything).  Due to training the Bride received under the aged martial arts master Pai-Mei (Gordon Liu) she is once again back from the dead.  That part of her revenge finished she goes after the man himself, although what she finds when she gets there is a lot more than she expects.
The tone of the two films is completely different.  Vol. 2 is the more laidback pacing, with more dialogue (although still not going off on too many tangents) and a lot more backstory on the Bride and even Bill himself.  The body count is also a lot less, which I think initially disappointed me after seeing the first half.  I had looked forward to Vol. 2 being at the same pace as the original and, when I saw it during its theatrical run, I was quite disappointed.
I enjoy it much more than I initially did.  The training scenes with Pai-Mei are one of the highlights, and Tarantino for once put his pretentions aside and had Gordon Liu speak in Cantonese without doing a bad dub job over it to maintain the feel of how martial arts films looked when released in the U.S.  I usually think of Inglourious Basterds being where his more scenic filming began, but the desert scenes show that he was beginning to unleash his inner Sergio Leone early on.
Speaking of, there are more references in this film, although they do feel more like refences than ripoffs (although Tarantino has admitted the burial scene was the latter).  Most notably David Carradine is carrying around and playing the flute he had in Circle of Iron and the final end credits are done in the style of a film from the 1940s, as are some of the shots of the Bride in her Karmann Ghia.  Tarantino has stated he wanted Vol. 2 to have more of the feeling of a western, and it is definitely there in places, but what it mostly feels like is the director getting back in his comfort zone.
Is it the better of the two?  A lot of people think it is.  Personally, though I like it a lot better without all the expectations I originally had, I find the two equally as good, especially since one cannot exist without the other.  The first movie does work a bit better as a self-contained film, but the problem is it has no resolution.  I think Tarantino did make the best decision when dividing the movies as the sudden change in pace would have thrown most people off if watching the whole thing in one go.  Still, together, both volumes of Kill Bill represent one of Tarantino's greatest achievements, and contain many of the elements that he would expand on in his future movies.
Kill Bill: Vol. 2 (2004)
Time: 137 minutes
Starring: Uma Thurman, David Carradine, Darryl Hannah, Michael Madsen, Gordon Liu
Director: Quentin Tarantino